“Walk Down the Aisle with Barack” contest

“Walk Down the Aisle with Barack” contest

The sickest thing about it is that when you read the headline, it didn’t surprise you in the least.  Such is the state of the Obama campaign.

With everyone talking about the bizarre Obama Event Registry, wherein people are asked to have wedding guests donate to Obama in lieu of the betrothed couple, anything is possible.

Brides who give up their wedding gifts to Obama will be entered in a contest to win a special Barack Bouquet so that Barack can walk you down the aisle.  (No, not really, but allow your imagination to roam in the age of Obama.)

He wants to be with you the whole way, because he cares that much. 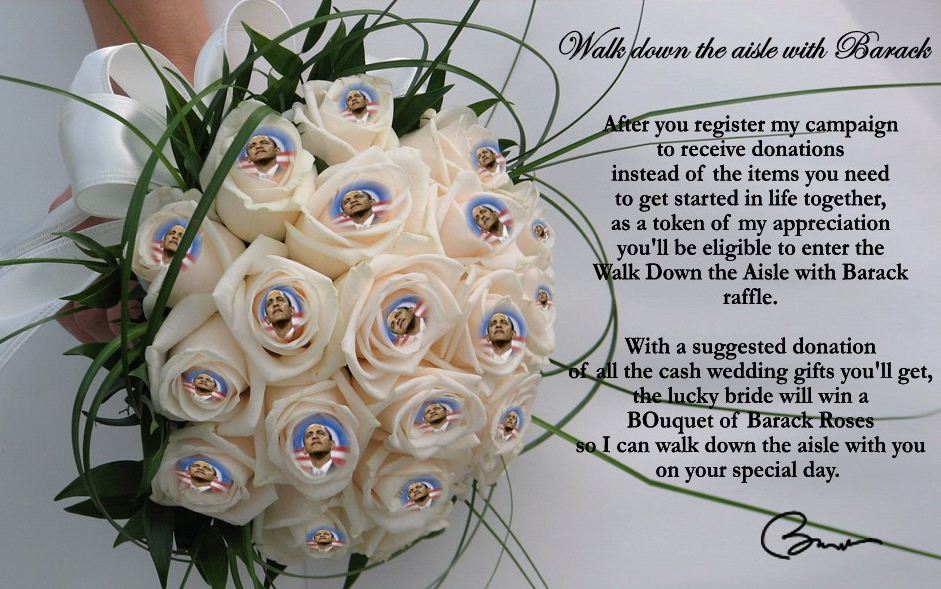 For more of what is possible, check out #ObamaFundraisingIdeas.

Umm, this is for real right?
I don’t mean to be disrespectful of the office of the presidency but it seems the fellow holding that position really doesn’t care anyway.
He’s quickly becoming an embarrassment, a laughingstock. I mean seriously, this from the White House?
There’s no dignity in this. None.

Why stop at weddings. There’s also christenings and bar mitzvahs.

Oh, and funerals. Perfect. “Why waste your money sending flowers when the memory of your loved one can help President Obama get reelected.”

Baby Showers. That’s even better. I can see the card now.

“To ensure that your daughter won’t get cancer because the Republicans have poisoned the Earth, I’ve donated the cost of your gift to the Committee to Reelect Barack Obama.”

Barack Obama: The Bride at Every Wedding, The Corpse at Every Funeral, the Child at Every Christening, etc.

In my estimation, the important point here is that some of the readers were willing to accept this at face value. That speaks directly to the fact that the Obama Administration has deviated from the norm so often and in such unexpected, if not outright strange, ways, that we’re ready to believe most anything.

Is this by design? Does this make it easier for them to go even further, as they have already laid the groundwork for the body politic to stop, wonder and ask the question, “Is this real?” Confusion and doubt were important tools used by Quislings and Fifth Columnists in earlier times.

Sorry, but everything these people do, I process through by Cloward-Piven and Alinsky filters. One of these days, there will really be a wolf out there when the little boy cries out!

I’d think a rather informal meeting at a D.C. club for drinks, then a little fornicating in the back of Limo 1, followed an abortion right before the election would be more Barry’s style…