This is an update to my prior post about the Dunes Sagebrush Lizard, which may shut down a lot of the oil exploration and production in West Texas if the lizard receives endagered species status.

Via reader, photographer (also here), and music impresario Danelle, the decision may come as soon as Thursday:

A day of decision is finally near for the West’s most-publicized reptile.

The Obama administration probably will announce Thursday if the dunes sagebrush lizard will be listed as an endangered species, said Tom Buckley, a spokesman for the U.S. Fish and Wildlife Service in Albuquerque.

An occupant of wind-swept dunes in oil country, the lizard exists only in four counties of southeastern New Mexico and four others in West Texas.

Buckley said today the announcement on the lizard’s status probably would be made in Washington. He expects either Interior Secretary Ken Salazar or Daniel Ashe, director of the Fish and Wildlife Service, to make the finding public.

I can’t even begin to describe how great the economies are in West Texas and Eastern New Mexico. Grocery store clerks are earning upwards of $15 an hour with all the hours they want. Waitresses/Waiters are pulling in several hundred a day in tips. Cooks with experience who can start today are getting cash bonuses on the spot. Entry level roustabouts can easily get $29 an hour with guaranteed overtime and paid on the job training.

Long story short – Every person who wants a job has one and not just in the oil field.

Listing the Dunes Sagebrush Lizard sets in motions a chain of costly regulation and significant increases in property usage restrictions that will create an effective shutdown of the entire region.

So the question is will Salazar and Obama disappoint their leftist base, the EPA and the environmentalist agenda on this one? Or does he prove once and for all that he will do whatever it takes to disrupt the energy industry, kill jobs, and drive up energy prices? The Romney ads would write themselves.

The only safe play here is to punt the decision to January, but the opportunity to throw the government yoke onto one of the most historic and prolific energy fields in the US might be too much to resist.

Remember the greatest threat to the Dunes Sagebrush Lizard is not the oil industry (photo courtesy of Danelle): 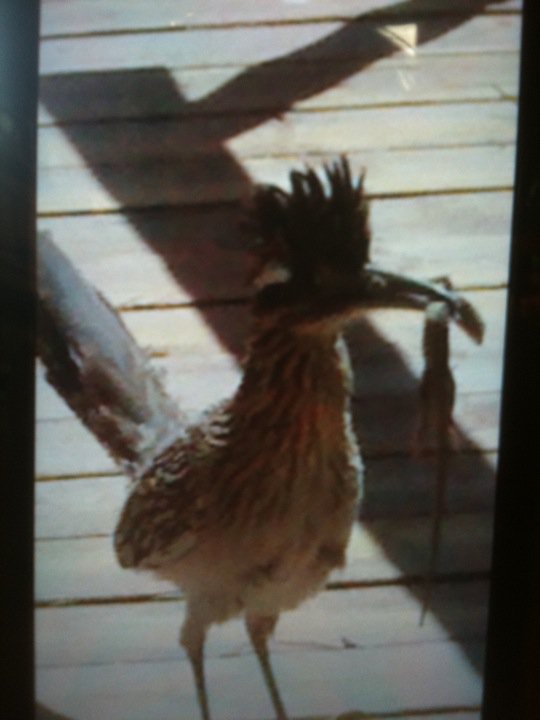 I’m 1/32nd Dunes Sagebrush Lizard, and I’m proud of it. We evolve or go extinct, as has been nature’s way since the beginning. Humans provide many structures and obstacles for us to hide in, in our never ending war against the evil road runner.

Environmental groups say that oil production has destroyed much of its shinnery oak, which has led to a dramatic decline in the lizard’s population.

OK, so instead of shutting down the oil industry by a claim that this lizard is endangered, just grow some more shinnery oak, or find a substitute. But of course the real plan is command and control of oil and ranching by some enviro nuts. They are trying to force their Gaia religion on us all, and demand that they be our high priests.

Having just spent 9 days driving from the Louisiana/TX border across the state and then down to South Padre Island, I can tell you that Texas, the antitesis of everything Obama believes in, is booming. He’ll have his minions do everything possible to throw sand in the gears of Texas just to try to make the distinction between his failed policies and those of Texas less stark.

And think about this – the stupid lizard isn’t even a species, it’s a sub-species of a quite common type of lizard.

No need to call the little guy stupid.

Spoke to Warren Chisum – Candidate for Texas Railroad Commission on this issue as well as two scientists – A&M and Texas Tech. The interesting thing about this case is that the lizards totally ‘disappeared’ for a few years – scientists assumed it was because of the oil production. Apparently according to above-mentioned scientists, the lizard is back living right next to the pipes of the production in record numbers. Go figure.