Should Elizabeth Warren be in “cultural appropriation” exhibit at Brown Univ. museum?

Should Elizabeth Warren be in “cultural appropriation” exhibit at Brown Univ. museum?

I stopped by Brown University’s Haffenreffer Museum on my way out of town after the Netroots Nation conference. They currently have an exhibit focused on American Indian representation in America entitled “Thawing the Frozen Indian.” The stated purpose of this exhibit “is confronting the complex, and often painful, history of cultural appropriation in order to foster conversation.”

We should nevertheless hold her [Warren] accountable for  the damage she has wrought—by either crassly capitalizing on the plight of the  American Indian or indulging in the fetishization of a frequently caricaturized  minority group….

Here is a placard from the exhibit, which includes the quote, “Playing Indian has a long history in the United States, all the way back to those original tea parties in Boston, and in no way is it better than minstrel shows or dressing up in blackface”: 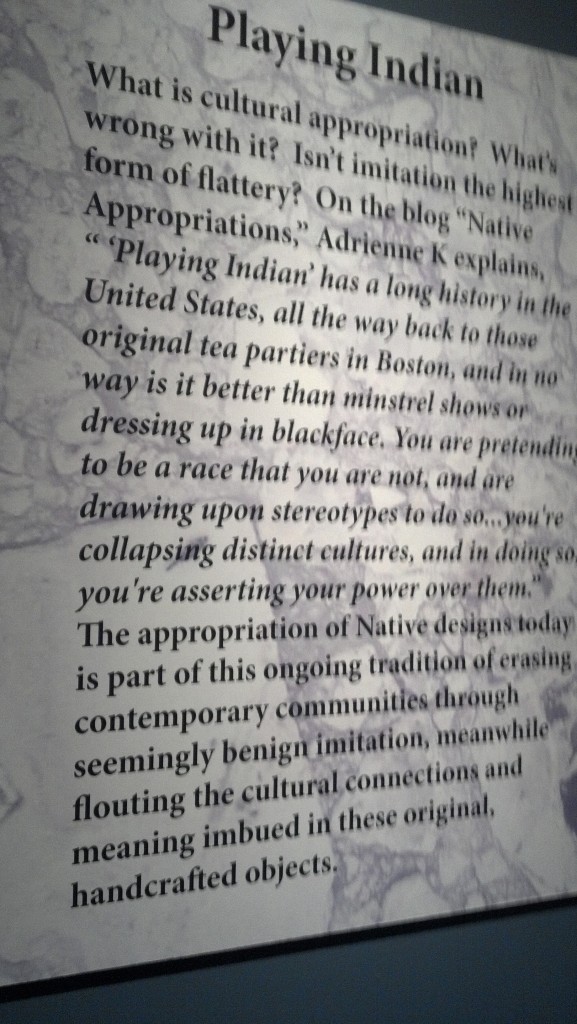 Perhaps Elizabeth Warren, if she’s still in town, will find the time to visit the exhibit. It runs through the summer.

Either high cheekboned Lizzie’s a wee bit smarter than you, or you’re a former raconteur obsessed with blues.

I say go for it. You can take the faculty slot that would’ve gone to the well-to-do classically trained violinist daughter of a black doctor and teach Comparative Studies in Confused Racial Musicology, filling a niche she never could.

The above comment was supposed to be Reply threaded to:

“Am I black if I say I am? As it turns out, I am pasty-pink in complexion.

Am I a woman if I say I am? As it turns out, I have one X and one Y chromosome per cell.

Either there are objective standards on race and ethnicity or there are not. You seem to think the latter. Explain how it is that it would be okay for Prof. Warren to claim native American ancestry and not okay for me to claim black ancestry.

I await your reply.”