Saturday Night Card Game (Is there any scenario under which the Republican would not be racist?)

Saturday Night Card Game (Is there any scenario under which the Republican would not be racist?)

That was on May 5, just about a week after Warren’s claim to be Native American broke, and as evidence just began to mount that Warren’s claim was untrue.

Yet the use of the race card in defense of Warren has not stopped.

You probably remember how a Daily Kos writer responded at NetRoots when Anne asked whether Elizabeth Warren should apologize to Native Americans (jump ahead to 2:25):

Panel member: I don’t speak to media who  have backgrounds of having trashed Indians.

Anne: I have never done that.

Panel member:  Excuse me I don’t talk to media who have trashed Indians over this issue, which is what’s been going on…. That because of the racism that’s come out over this, I have my own opinions about it and their not anybody else’s business.

Daily Kos immediately got involved not only by trying to block Anne at the conference, but by playing the race card.  While authors are not responsible for comments, the author of the Kos post chose to promote this comment to the top and include it as part of the post update:

Here’s how one Warren supporter has responded to Anne’s post about the “cultural appropriation” exhibit at Brown University: 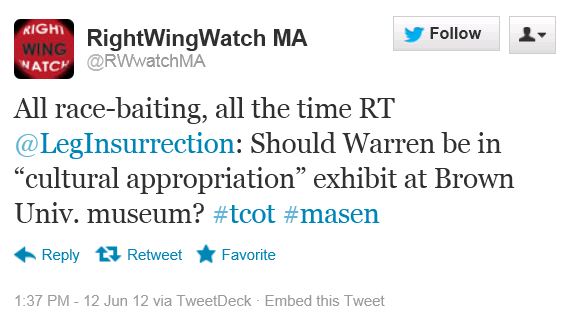 The irony, of course, is that no one from Legal Insurrection has used stereotypes like claiming all Indians have high cheekbones:

Tim Stanley at The Daily Telegraph (Britain)(h/t numerous readers) also notes that if roles had been reversed, and it was a Republican falsely passing herself off as minority for professional purposes, it would be the faker who would be called racist, not those exposing the fakery.

Elizabeth Warren’s ‘Native American’ claims: if she was a Republican, the media would call her a racist:

Imagine if a Republican candidate claimed, confidently, that she was part Native American. Imagine if she had actually used that identity to have herself listed as a minority at Harvard, qualifying her for special treatment and celebration as proof of how diverse and progressive her department is. Imagine if, many years later, it turned out that her claims to Native heritage were dubious and, when pressed for proof, she offered her “high cheekbones.” Oh, and she once contributed a recipe to a Native American cookbook called “Pow Wow Chow” (that may even have been plagiarised).

Chances are, that Republican candidate would be hounded night and day by the press, branded a racist and probably be winding down her political career.

I think I have this straight, let me know otherwise:

Is there any scenario under which the Republican would not be racist?

I just want to know.  Consider it a theoretical thinking exercise.

Very good observation of one of the tendancys inherant in being GOP. It’s why we can’t contain our eagerness to get out there & push , push , push for “our” party!

Let’s give a welcome to Macaca here. Yo Liz.

Maybe the Warren supporter, “RightWingWatchMA” should come join us. Unlike the Lefty blogs, we welcome trolls divergent opinions on the right.

Should she stick with Native American or go for lesbian African American?

[…] announcement (below). I also found an excellent item by Cornell Law Professor Jacobson — Legal Insurrection Blog — that is appropriate for this discussion: “Saturday Night Card Game (Is there any […]