In the latest CNN Presidential poll, Romney is trailing President Obama by just 3 points, making him within the statistical margin of error for the sampling. The new numbers mean that the President has dropped 6 points in a little over a month. Via Breitbart.com:

Last month CNN’s poll showed the President with a 9-point advantage (52-43%). The high water mark for the President has been 54% in CNN’s March poll.

The internal sampling for the poll isn’t available at present, so it’s not clear if the sampling of the new poll is identical to previous ones. CNN does note that today’s poll was taken before the release of today’s disastrous jobs numbers.

So the President’s numbers are sliding, his job approval ratings are not good, unemployment numbers are again on the rise, and work force participation levels remain dismal (see chart below). Given that this poll was taken before the May employment figures came in, it is yet unclear where the bottom is for the President, but my guess is that the Obama reelection team is frantically trying to find it. 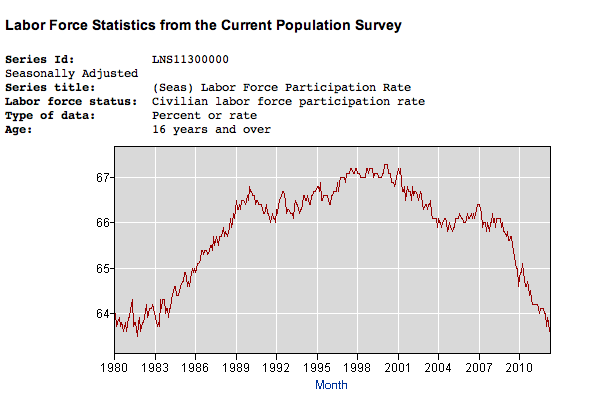 I just “rediscovered” InTrade…. Lot of folks going long on Obama. As for me, I am putting my miner (literally) on the Republicans. I’m even making money watching O’s popularity rating stay under 47.5%

Oh ..OT… InTrade has Walker at 98% for winning. Wish I could have bought on that one when it was still lower. Still, will be glad to see it happening.

Forgive my ignorance, Doc, but does InTrade actually take physical (monetary) bets? How do they do that without being caught up in the gambling laws? I’ve heard of them, but know nothing about them.

It is based in Ireland. Go to ‘in trade.com’ – they have FAQ that answer your questions. Yes, it is physical money.

Even if a person doesn’t become a member, can look at the site as if it was a barometer of polling. The site has a number of videos where they were on Fox and 20/20.

Enthusiasm is not something that wins elections, voting is. I may not have the warm and fuzzies for Romney, but I’ll vote for him.

Dear Leader’s people may be enthusiastic, but dissatisfaction is a stronger emotion when it comes to elections.