Ann Althouse (via Instapundit) has a post about a mailer she received from a pro-Recall group in Wisconsin telling her which of her neighbors voted and which did not in the past several years.  Althouse’s reaction:

This is an effort to shame and pressure people about voting, and it is truly despicable. Your vote is private, you have a right not to vote, and anyone who tries to shame and an harass you about it is violating your privacy, and the assumption that I will become active in shaming and pressuring my neighbors is repugnant.

Not voting is a valid choice. If you don’t have a preference in the election, don’t vote. If you think no one deserves your vote, don’t vote.

This may be the most disgusting thing I have ever received in the mail.

A few days ago a reader sent me a mailer he received telling him the political contributions of his neighbors.  He wrote:

I got a mailer, claiming to be part of an authorized study project at your alma mater, Harvard University, listing some of my political donations along with some of my neighbors’ donations. The point of the study is not really explained in the email, but the point seems to be whether veiled threats influence future donations. In California and other places as well, the Left has a history of using this information to harass and intimidate private citizens. The examples associated with Prop 8 are too numerous to list.

My wife was furious when she read the mailer, and I think she correctly interprets its contents as a threat, especially with the reminder that “Access to the data is anonymous”.

I am attaching cleaned up scans of the mailer. This is a little old as the mailer was dated April 25, but I just ran across this when going through my junk mail pile. My apologies if you’ve seen this already.

[in a follow up e-mail] I did a couple quick google searches on the researchers involved, Ricardo Perez-Truglia and Guillermo Cruces, and neither one has shown any prior interest in voter behavior or political contributions.

Here’s the inside of the mailer with names and donations obscured by the reader: 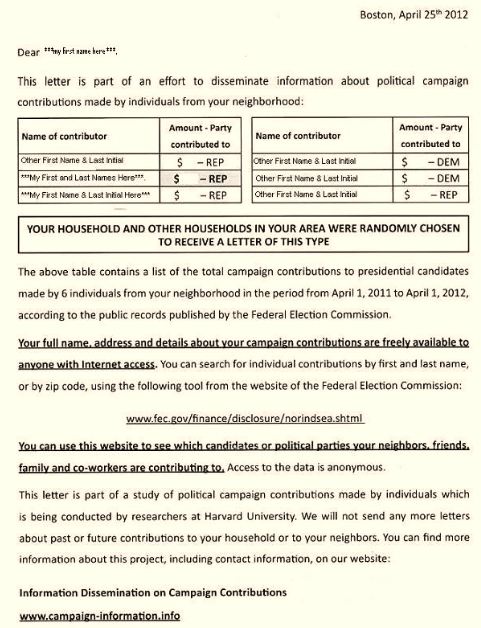 Althouse reports that a reader sent her a similar mailer, although it appears to be different readers based on the information in the mailer.  Alhouse also indicates there is an unclear history to the group behind this.

Here’s the website of the group.  I have e-mailed them for more information, and will report what I hear back.

In the meantime, welcome to the new world of data-mining for political purposes.  Whether it outrages you or not, get used to it.

Update:  A reader forwarded this academic study showing that voter turnout is increased by using the types of mailers Althouse received about neighbors’ voting habits.

[…] least I hope so.) But out here in New York, Professor Jacobson brings us a tale of people receiving even more disturbing mailings. A few days ago a reader sent me a mailer he received telling him the political contributions of […]

[…] Legal Insurrection’s William Jacobson (via Jazz Shaw at Hot Air) tells of another even more creepy tactic. The Left is now revealing to friends and neighbors to which political candidates you have contributed. […]

Ricardo Perez-Truglia is a graduate student in Economics at Harvard…is this his dissertation research project?

It’s impressive that he got this study design approved by his advisory committee…unless of course they know nothing about it. Harvard doesn’t give a lot of oversight to its graduate students, they are pretty much free range (I speak from experience). Is there an Institutional Review Board (i.e, ethics review) approval number for this project? Big projects that involve contacting the public in Harvard’s name require an IRB review.

Speaking of ‘nice little house you got there’, it would be a shame if this person were using his Harvard affiliation to promote a personal political project. I rather suspect the university knows nothing about this.

If they were curious, someone could call up the Econ Dept, read the letter, and then request the IRB number on this project.