I want to get high

I want to get high

Manic high or low.  That’s how people are going to be feeling after the Wisconsin Recall results come in tomorrow night.

I want to get high.

Turnout in Wisconsin will be everything.  The latest PPP poll shows a 3-point margin for Walker, based on a more enthusiastic Republican electorate. (Update: A Warning About PPP’s Wisconsin Poll, “So, PPP changed its methodology at the end of the polling cycle? That itself is a huge no-no, but then it went on to infer that the race is tightening? My goodness!”)

Via The Free Beacon, turnout models favor Republicans.  Via Robert Costa at NRO, Republicans have a big GOTV effort under way, including telephone banking:

Shortly after 5:30 p.m. Sunday, a flashy two-car motorcade pulled up in front of the Destiny Youth Plaza on the northwest side of Milwaukee. A crowd gathered around the first car to greet the Reverend Jesse Jackson, visiting Milwaukee to speak on behalf of Wisconsin workers and to rally voters to unseat Governor Scott Walker in the recall election here Tuesday. If anyone was bothered by the fact that Jackson arrived to speak on behalf of the working class in a Mercedes Benz S550 (starting price of some $100,000) and that his escort vehicle was a Cadillac Escalade ESV (starting at about $75,000), nobody showed it.

If you know someone in Wisconsin, call them. They need to vote. 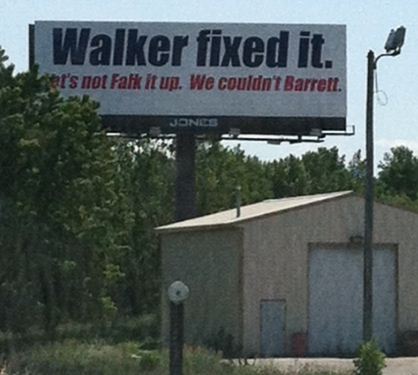 (Photo via reader Dan from Michigan, who writes:  “Obviously it isn’t a bumper sticker, but I was just in Wisconsin and saw this billboard, and I thought I’d pass it on to you. Sorry I couldn’t get a shot that wasn’t partially obscured. The text is “Let’s not Falk it up. We couldn’t Barrett.””)

There’s another poll out today, a WeAskWisconsin poll:

It’s an honor to be called Mulligan Democrats. Legal, constitutionally provided for do-overs are what this country is supposed to be about to correct stolen elections through fascist ballot fraud, disinformation, or Citizens United super PAC false advertising.

Florida and other states are looking to purge their voter rolls of Democratic votes by whatever means necessary.

The GOP and Fuchs News misreport the story every time to serve their candidates and oppressive, greedy agenda.

Recall elections are more American than apple pie and Frisbee. They’re what Thomas Paine would’ve called “common sense” in the face of tyranny and distortion.

The hope today is that better informed Wisconsin citizens not only get high on voting for a humanitarian and honest government this time around, but also for one that might lead to the highs of decriminalizing marijuana and raising taxes to support the less fortunate all around us.

Followed up with a nice, steaming bowl of bullshit, as you’ve served up here.

See, any time democracy provides a result you don’t like, you can…and will…roll out the same idiocy you wrote here.

Not a word of it is true, but suppose, for fun, you were up against a false message widely disseminated.

In a democracy, you get out and try to persuade. Once the vote is cast, you are DONE for the nonce. You get another bite at the next election.

What’s with this “moron” name-calling?

Guess it didn’t occur to you that I might agree I have more going on?

Have a lovely evening, oh geni-us of rubbed brass lamp wishes. You may address me as More On Master when fulfilling Progressive dreams and some of our retrograde fantasies.

Legalize Marijuana & require standards of cultivation , food safety -in all then treat it like a business. THEN YOU CAN tax the product , the process & the profits. The tax will have to be higher than tobacco to make up for 50 years of lost time.

Wisconsin to Lean Forward Full Throated not just half cocked.