Drudge ran a classic headline today regarding the decision of the Department of Homeland Security to suspend all existing cooperation agreements with Arizona in light of the Supreme Court’s unanimous upholding of §2(B), permitting authorities to check the immigration status of persons otherwise lawfully detained: 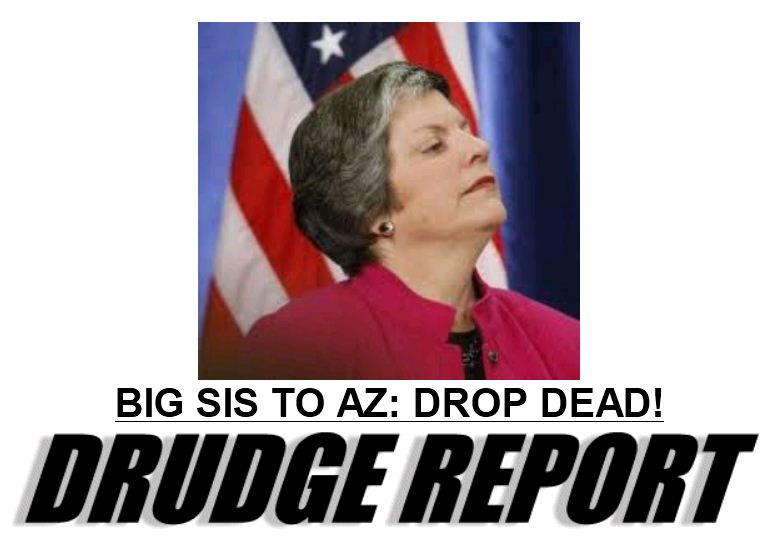 While it is true that the feds want to undermine Arizona as completely as possible, as they always have since SB 1070 was passed, I think the more correct headline should have been:

Keep in mind the Supreme Court’s holding.  The Court unanimously held that there was nothing unlawful on its face with §2(B), and based on what currently was known, it could not be presumed that the law would be applied in a manner which would conflict with federal law (emphasis added):

However the law is interpreted, if §2(B) only requires state officers to conduct a status check during the course of an authorized, lawful detention or after a detainee has been released, the provision likely would survive pre- emption—at least absent some showing that it has other consequences that are adverse to federal law and its objectives.

The Supreme Court addressed the issue in good faith, based on an understanding that merely reporting an illegal to the feds was not contrary to federal law or its objectives.[*]

So what did Big Sis do?  Within hours of the Supreme Court’s decision she changed the objectives.

Now it is contrary to DHS’s objectives for Arizona to report illegals on a more frequent basis once §2(B) takes effect.  That’s why the cooperation agreements were suspended.

Voila! The feds create a potential conflict based on conduct the Supreme Court held — based on the facts existing hours earlier — did not create a conflict.

Whether this ploy will work remains to be seen, but I expect it to be argued if and when there is more litigation.

The suspension of cooperation agreements was a slap in the face not only of Arizona, but of the Supreme Court as well.

* I should note that Justice Alito in his partial dissent rejected the notion that preemption could arise from a conflict with “a federal agency’s current enforcement priorities.”

I bring to your attention a thoughtful piece written by KrisAnne Hall.

Again: laws are “subject to the Attorney General’s direction and supervision.”

…Sayeth the new and improved U.S.Constitution

The root of this is Obama’s political pandering to hispanics, a group he otherwise ignores. By refusing to enforce laws against illegal immigration, and by refusing to allow individual states to do it themselves, the living, breathing, working, tax paying citizens who reside along the US/Mexico border now have three choices:

1. Pack up and leave for an interior state, no matter the losses.

2. Take whatever crap comes their way from across the border; absorb all damages, injuries, deaths, etc.

3. Take the law into their own hands.

If they opt for #3, how ironic will it be, how tragic, and how boneheadedly stupid, when the federal government sends in forces to quell the illegal vigilanteism after having refused to address the illegal border crossings, a refusal that directly caused the vigilanteism? And all of it based on nothing more than Obama playing politics.

The man’s a political moron. He proceeds on panderings, ignorance, and spite.

Your “No.3” was said to be one of the political objectives in Fast & Furious.

…making Mexico so dangerous, it’s citizens would flee north for the safety of the U.S…

I will no longer use the term “far fetched” when referring to this White House.

Could someone with a legal background explain to me whether a writ of mandamus could be used to force the government to enforce the law? If I understand correctly, a writ of mandamus is an order by the court to do what you are supposed to do. Couldn’t AZ apply for one?

I’ve seen others suggest just that.

However, I cannot for the life of me understand why someone wouldn’t believe that too would be ignored.

And here I thought the Federal Government was created at the convenience of the Member States.
Ahh…. silly me.