Anne Sorock attended the Netroots Nation convention yesterday morning, and asked a thoroughly legitimate question of the members of a panel on Native American identity:

“I thought it was really interesting in particular that you wondered to yourself, ‘what is a real Indian,’ and you also said ‘it’s time we speak the truth.’ Elizabeth Warren is running for Senate in Massachusetts and has claimed, falsely, to be a Cherokee Indian. Do you think she should apologize to the American Indian community?”

This question about an apology is similar to the demands for an apology by a group of Cherokees and members of other Indian nations who are upset that Warren continues to claim she is Cherokee when all the genealogical evidence says otherwise.

One would think that “progressive” bloggers and attendees at Netroots Nation would join in this call for an apology. What could be more contrary to stated liberal support for native peoples than to object when someone uses a false claim of Native American ancestry for professional and political purposes?

Instead, the reaction has been swift and vicious.  As soon as Anne left the room, someone came up to her to take her photo, and that photo and a post at Daily Kos appeared even before Anne had a chance to do her post here.  (Anne’s post was at 1:49 p.m. Eastern, the Kos post appeared at 12:41 Eastern). 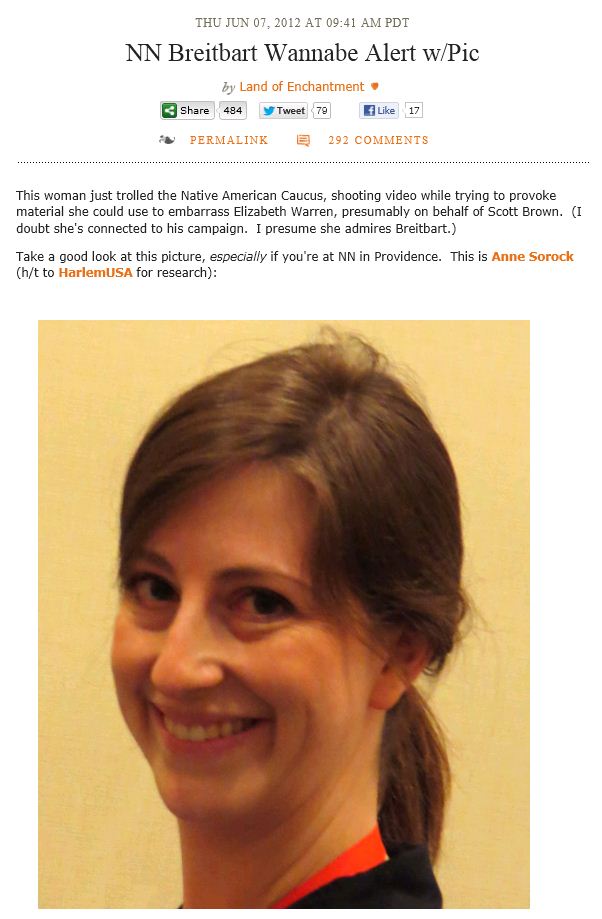 Read the comments to the Kos article — it’s pretty much what you would expect and then some.  There were demands to ruin Anne’s career, calls to confront her if she reappeared at Netroots Nation, information about her including links to her non-profit research entity, and threats to use “black bloc” tactics on her.

But it didn’t stop there, another author at Kos posted another entry posting more information about Anne, and suggesting that she is racist.  It also included this request for Kos readers to try to manipulate Google search algorithms:

May I ask that each individual who feels compelled to respond to this diary to be sure and spell out Anne Sorock’s name when referring to her inane behavior. This will allow the diary to better “brand” her ridiculous actions when individuals use the net to try to find out what sort of individual she truly is. Thank you.

As if that were not enough, yet a third Kos author posted about Anne:

The technique comes to attention as breitbarting moves beyond Breitbart’s own “Big” websites and O’Keefe’s antics, this time at the Netroot Nation conference in Providence, RI. Someone named Anne Sorock attended a panel with the express purpose of embarrassing Native American panelists with a question concerning Elizabeth Warren’s ancestry. She was exposed in the midst of her attempt, but posted her story anyway. As usual with breitbarters, she manipulated the event she wrote about both in words and in selective editing.

Why are the Kos folks so upset?  All Anne did was ask a question which they should be asking, why won’t Elizabeth Warren apologize for falsely claiming to be Cherokee?

These are typically Alynsky tactics — try to isolate the person and personalize the attacks.  Rather than address the progressive failure to confront Warren, they try to change the topic and make it all about Anne.

According to each of the Kos authors and many of the commenters,  what Anne did constituted “Breitbarting.”  Indeed, if you read the posts and comments, they are obsessed with “Breitbarting”:

One of the brilliant parts of breitbarting is that the breitbarters have learned that being called out, even immediately, even irrefutably, doesn’t matter. What matters is the attention. Sorock may or may not be on the way, now, to media stardom, but that (and confirming right-wing prejudices) is her intent–the truth or falsehood of what she has “uncovered’ is irrelevant.

Asking questions and recording the answers apparently is a bad thing when it involves puncturing a progressive failure.

I don’t know if Anne is on her way to media stardom as the Kos author wondered, but one thing is clear:  Breitbart lives in their heads.

“Breitbart lives in the heads of Netroots Nation protectors of Elizabeth Warren.”

Like trichinosis lives in the heads of swine, apparently.

Who is clicking all of the 1 dislikes? Show yourself, cowardly troll.

One very important FACT everyone must remember is that ALL liberals, progressives, leftists, democrats, greens, feminists, multiculturalists, PC lovers, UN supporters, etc… only care–ONLY CARE–about one thing: the advancement of worldwide Marxism/Socialism/Communism. PERIOD DOT. Every issue they supposedly support or advocate is nothing more than a means to their Marxist ends. So, by saying they are “hypocrites” with “no shame”, although absolutely true, misses badly on characterizing them, which they like.

[…] convention and, well, it wasn’t exactly the rah-rah session it usually is. There was at least one very uncomfortable question and one conspicuously empty hall. On the other hand, they did get in at least one spurious […]