I was not aware that such subversive speech against the dear leader was allowed in deep blue Maryland…this was taken in a gift shop in the Inner Harbor in Baltimore. 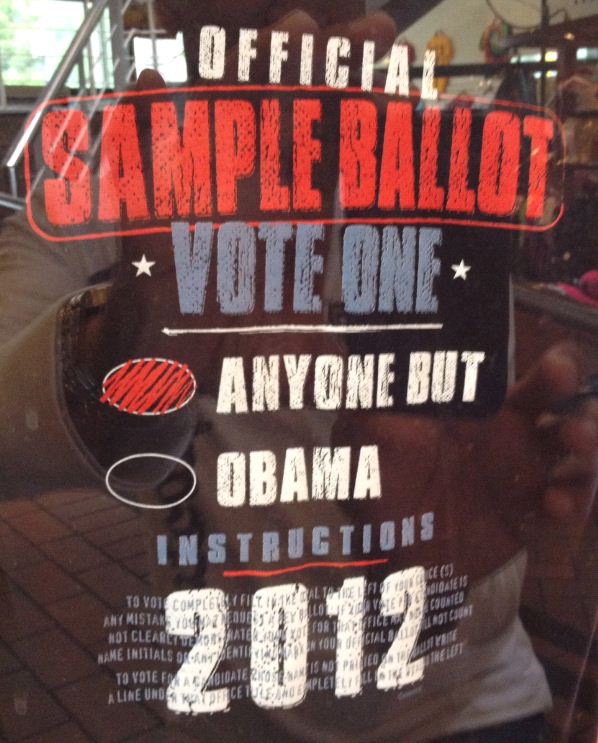 Except there will be no line that says Anybody but Obama on the ballot.

It matters whose name is on the ballot.

If there were an Anybody but Obama choice on the ballot, I’d choose it.

But I may not choose whoever the other name appears on the ballot is.

It matters who we replace Obama with.

Does anybody really believe that a President Romney, especially if he has a Republican Congress to push him, would govern as liberally as Obama? How about as incompetently?

[Note: I was not a Romney supporter in the primary]

RCosta, any relation to Costa of National Review?

Because he’s been pro Mitt Romney for some time.

Mitt Romney:
Mandates healthcare
Has engaged in and supports crony capitalism
Appoints liberal judges
Fundraises as much as Obama

It matters who we replace Obama with.

W. Bush was less liberal than Romney and the Republican Congress felt it was their duty to not cross their Republican President. So we got:

Just the opposite actually.

And Romney’s to the Left of W. Bush.

hrh40,
No relation, I’m afraid. And as I said before, I am not a long time Romney backer. If you look at my blog, you will see my focus has been on beating Obama, rather than backing any particular Republican candidate.

While I agree with you that it matters who we replace Obama with, that die has already been can cast. We either replace him with Romney or we don’t replace him at all.

As the sample ballot indicates, I would vote for anybody over Obama: Romney, Gingrich, Santurom, Paul, Cain, Palin, Daniels, Christie . . . . If our choice was between Obama and Bill Clinton, I would vote for Clinton. I would even vote for Carter, if that were the choice. As bad as Carter was, Obama is worse. I would say he is the worst President this nation has had, at least since Andrew Johnson.

Romney may be to the left of Bush. I don’t know. But he is well to the right of Obama.

The reflection in the window …

She was a million in one.

There’s a big difference between mere social liberal and hardcore anti-American Islamofascist muslim supremacist with no jobs, no tourism (Inner Harbor is dependent on tourism) and rampant inflation.