Occupy Chicago held a “F** the Police” rally as they marched through the streets Tuesday night shouting “From Chicago to Greece, F*** the Police.” A short video clip I took as the crowd was just beginning to form follows (language warning: not safe for work):

Compared to last fall’s protests, the level of anger and violence has escalated both in the demeanor and chants of the protesters. More overtly visible Communist and anarchist flags and symbols were in evidence in the clothing, flags, and chants of the Occupy crowds.

Video cannot capture the feeling of walking among the Occupy of spring 2012; the group Tuesday night seethed with anger and a desire to engage with the police, taunting and yelling at them as they lined the streets. Many were dressed in all black with masks or bandannas covering their faces.

Chicago Riot Police with helmets and clubs were called in as they attempted to keep the march on the streets, and they lined the roofs of the buildings along Halsted Street. One of the Occupiers yelled “Sieg Heil” as the marchers made their way north.

“It’s quite possible the police are worried about property damage,” said a man livestreaming the march as police corralled the protesters off the sidewalks. 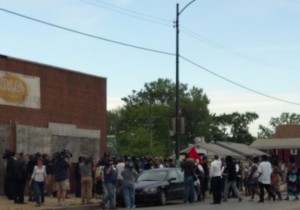 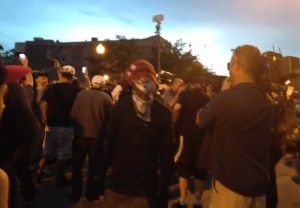 At 8:00 pm CST, one of the Occupiers struck an elderly man; the man walked away rather than press charges: 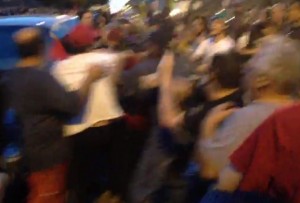 By 8:30pm, storm clouds had gathered and tensions were on the rise and a few minutes later they stormed the CTA train station screaming, “Whose Trains! Our Trains!”

Occupy Chicago was already trying to distance itself from the violence of the march Tuesday night, saying that it wasn’t affiliated with their group. However, the official twitter stream promoted the location of the march and “@occupychicago” along with the hashtag #FTP: 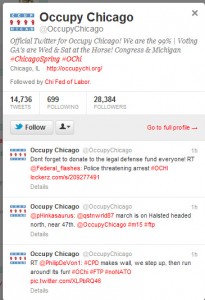 The protest was neither nonviolent nor about NATO; this was about a show of force against the local authorities and setting the tone for the rest of the week.

“You DO know how the railroads got built in this country, don’t you? Massive land giveaways to private corporations.”

You DO know, don’t you, that there were railroads that were built without government giveaways? Likewise steamship companies, mining companies, oil companies, etc, etc?

And yet those companies were just as much a target of anarchist & socialist ire.

I was merely responding to your ridiculous comment that crony capitalism is a recent phenomenon. It has dragged on in this country since before it was a country. The recent whoppers (whereby the banks own the Treasury, Wall Street own the SEC, and the Democrat-passed health care plan is just welfare for health insurance and Pharma companies) still pale in comparison to a bunch of rich white guys deciding that they could own black people, having the state enforce that privilege through one odious law after another. The rich, generally speaking, attained and maintained that wealth by proximity to the levers of state power.

I’ve heard this argument before, usually in relation to racism being an invention of the “White Man” to keep the “Black Man” down. It’s usually shouted by people who are wholly ignorant of history, and who like to scream at me that I am a product of “white privilege” because I am reasonably successful. The often ignore the years of hard work, long hours and literal blood, sweat and tears I’ve had to put into my work to achieve that modest success, and the screamers would rather attribute their lack of success to an unfair system rather than recognize that they’re just not willing to put in the WORK.

Read “The Invention of Racism in Classical Antiquity” by Benjamin Issac, which details the origins of Racism as far back as 5th Century BCE Greece, which includes, strangely enough, some discussion of Slavery. It’ll be eye-opening in your thinking about the underlying causes of slavery and about “a bunch of rich white guys deciding they could own black people….”

You valiantly argue against a point I didn’t make. I point out that slavery is the American experience is a form of crony corporatism, not who invented it. The use of state power to service the needs of a preferred class against others. It began then and continues unabated, albeit in different forms, to the present day.

And you are ignoring my observation that an anarchist justification for wealth redistribution based on a crony-capitalism argument is dishonest because our anarchist friends have and will attack any company regardless of how little purely free-market its practices. In the end, the anarchists merely covet.

I look forward to learning of this mythical free market corporation under attack by anarchists that you speak of.