Maryland’s April employment figures are cause for concern

Maryland’s April employment figures are cause for concern

Maryland’s loss of 6,000 jobs was the largest of any state in the nation last month. Some have been quick to write off the figures as a product of unusual weather patterns affecting seasonal hiring practices, but there is a growing belief that the Maryland economy is not as solid as once thought. In addition to April’s figures, the employment numbers from March, which originally posted a gain of 1,500 jobs, were recently revised and now show a loss of 600. 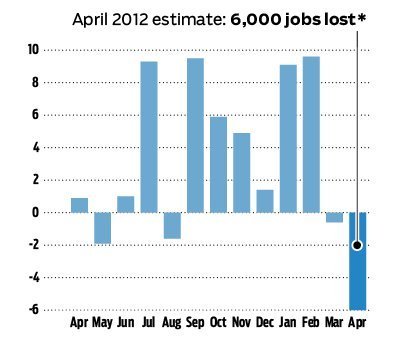 Although Maryland’s unemployment rate now sits at 6.7%, well below the national average of 8.1%, a number of factors have some worried about the stability of the state’s economy. Among them, the unpredictability in Europe, the state’s dependence on big funding from the federal government, and the recent income tax increase which passed in the Democrat dominated state legislature.

From the Baltimore Sun:

Richard Clinch, director of economic research at the University of Baltimore’s Jacob France Institute, agrees that seasonal adjustments are “wreaking havoc” on the numbers. But the new revisions switching Maryland from gains to losses in March troubles him. When the economy is recovering, revisions tend to add, not subtract, he said.

“I’m worried that the recovery doesn’t have legs,” he said, pointing to more economic problems in Europe, which could ripple across the Atlantic.

Clinch said Maryland politicians’ special-session decision this week to raise income taxes for the highest earners leaves him feeling pessimistic that the state — a big recipient of federal largesse — will be able to chart a smooth course through the choppy waters of looming budget cuts in Washington. Maryland has yet to deal with its own structural budget deficit, and state leaders missed an opportunity to take a harder look at spending, Clinch said.

“The Maryland economy going forward, I think, is going to be quite fragile,” he said.

The new income tax increase may also hinder the economy at a time when private sector job creation is imperative for the state. (Emphasis mine).

Kathleen T. Snyder, president of the Maryland Chamber of Commerce, said the tax increase will have a direct and possibly unintended effect on some businesses because taxes on revenue earned by limited liability companies and other common entities are paid through their owners’ personal income tax returns.

It’s not yet clear what the significance of the last two months is, but it should certainly be on the minds of Maryland voters as we inch closer to November. Ultimately, it could prove to be a valuable area of critique for Republican candidates to use against their Democrat counterparts in Maryland, including the newly discovered candidate for U.S. Senate, Dan Bongino.

Several years ago, the liberal Democrats decided to implement a millionaire’s tax with hopes of bringing in an addition $106 million dollars. Guess what happened? A lot of the millionaires left the state!

The higher tax rate netted $100 million less than what the millionaires paid the year before. Not only did they lose the income tax on many of the missing millionaires, they also lost the sales tax money that those millionaires spent in the state. Businesses also lost sales to those missing rich people that left. You wonder how many businesses left too, so owners could avoid the tax. Finally, the millionaire tax caused many rich people and businesses not to move to Maryland. Why move to a hostile tax state when you have better options like PA, DE and VA?

Things will really get worse when the Federal Government finally starts firing people in mass. The days of spending over $100,000.00 a second will eventually halt. When that happens, MD will be screwed due to the high spending by it’s liberal legislature. There won’t be money to pay the bills when they can no longer tax fired federal workers. Many of the rich and private sector businesses will be long gone. The tax burden will be left on the rest of the people living in MD.

My wife and I left the Emerging Peoples Republic of Montgomery County as soon as I retired. We moved to West Michigan – no state taxes on pension, lovely people (who speak English), great weather, low crime, good local health care facilities, no traffic.

Never looked back, never missed a thing about Maryland (other than friends)and have extended and enriched out lives to a degree we can’t believe.

Martin O’Malley was as bad a musician playing with young guys in an Irish Band at Ireland’s Four Provinces in D.C. as he is a politician (or maybe not).

Good luck all of you trapped in Maryland – hosta la vista!

I live in Maryland, and have since 2004. You MUST keep in mind that MD politics are dominated by the city of Baltimore, Ann Arundel, Montgomery, Prince Georges, Howard and to a lesser extent, Fredrick and Cecil counties. Those counties are all deep blue…and have the majority of the population, most of whom work for some government entity, whether federal, state, county or municipal. It’s in the interest of the voters of those counties to expand the scope of ALL levels of government, at the expense of the private sector.

I think what you’re seeing now in MD is the tipping point…the point beyond a state’s economy can no longer support the massive level of government. I will start of new job on Monday (tomorrow) for a company in Maryland that during my interview process was talking about moving to Florida…to avoid the huge increase in taxes and regulatory burden that is part of doing business in Maryland…

For those interested in Dan Bongino, check out his website, and especially this interview with Dennis Miler.