Elizabeth Warren’s biggest whopper of them all

Elizabeth Warren’s biggest whopper of them all

Warren just pulled this out of her bag of victim lines. 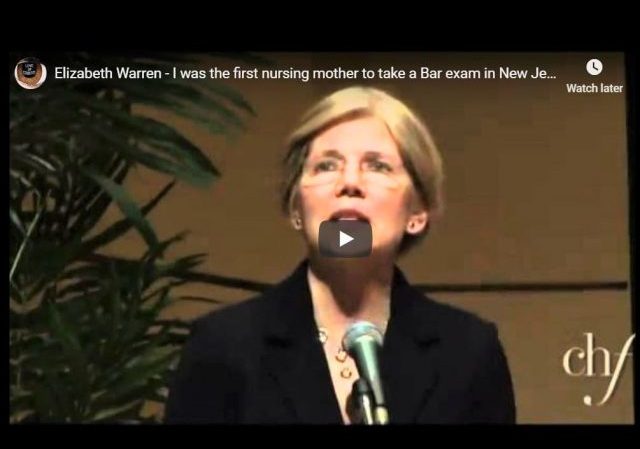 There is something frighteningly Obama-like in Elizabeth Warren’s self-descriptions.  Warren paints a personal narrative of rising from poverty and being the descendant of the brutalized Cherokee tribe, when in reality neither was true (and irony of ironies, she’s the descendant of someone who likely brutalized the Cherokee).

Her academic work carried forward the victim narrative, as she misleadingly portrayed medical expenses as the primary cause of personal bankruptcy, and used innovative number crunching to portray a “two income trap” which, using a fair analysis of the numbers, actually pointed to marginal tax rates not the evil banks and credit card companies as the primary culprit.

Yet The Boston Herald has stumbled upon what may be Warren’s biggest whopper of all, the claim that she was the first woman in the history of New Jersey to sit for the Bar exam while a nursing mother.  Via The Boston Herald (emphasis mine):

Warren, who had no public events yesterday, again refused an interview request from the Herald, responding to questions instead through a spokeswoman by email. Meanwhile, campaign officials scrambled to address another claim Warren’s made about her life’s story.

“I was the first nursing mother to take a bar exam in the state of New Jersey,” Warren told an audience at the Chicago Humanities Festival in 2011, in a video posted on the CHF website. When asked how Warren knows that, her campaign said: “Elizabeth was making a point about the very serious challenges she faced as a working mom — from taking an all-day bar exam when she was still breast-feeding, to finding work as a lawyer that would accommodate a mom with two small children.”

Winnie Comfort of the New Jersey Judiciary, which administers that state’s bar exam, said there’s no way to verify Warren’s claim. Comfort said women have been taking the New Jersey bar exam since 1895, but she’s not aware their nursing habits were ever tracked.

Of course no one tracks whether women taking the Bar are nursing.  Who would track such a thing?

Warren just pulled this out of her bag of victim lines.

It is classic Warren, an unverifiable and unrefutable claim in which the truth doesn’t matter, only whether the statement serves a political purpose.

On it’s face, Warren’s comments seem to be silly but harmless self-congratulation, and that’s how a lot of voters will probably see it. But it does speak to a pattern of exaggerating and stretching biographical details. It’s not just the substance of Warren’s claims that’s troubling, but the habit.

Additional Update: There has been some suggestion that Warren was just joking around when she made the bizarre statement. There is no way Warren was joking around. In the morning I’ll post a longer clip in which it will be clear that Warren’s statement about taking the Bar was just one in a long line of gender-based obstacles Warren was recounting to the audience.

[…] picture that should be troubling to Massachusetts voters, a now-established pattern of lies and exaggerations and obfuscation designed to avoid personal responsibility while campaigning for a greater share of […]