While Elizabeth Warren is doing well in the polls, her story about not promoting herself as Native American for professional purposes continues to fall apart.

Michael Patrick Leahy, writing at Breitbart.com today, links to an article in the Spring 1993 issue of the student-run Harvard Women’s Law Journal, when Warren was a visiting professor at Harvard Law.  (Side note, it’s a very common practice among law schools who are considering hiring someone permanently to have them “visit”.)

Yet while just a visitor, Warren was listed in the Women’s Law Journal on the list of “Women of Color in Legal Academia.”  Where would the student editors have come up with the idea that Warren was a “woman of color”?  Certainly not from looking at her.

The Journal used the 1991-1992 AALS directory list of Minority Law Teachers — on which Warren’s name appeared as we now know based on her claiming Native American status — as a starting point, then gathered other information from other sources, and then sent out confirmation letters. 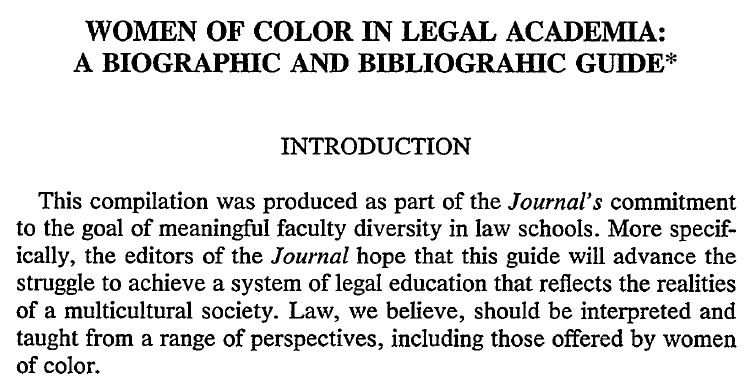 This is further proof of how important the AALS Directory was in pre-internet days.  Warren apparently did not object to being listed when she received the confirmation letter, and it’s hard to believe she did not read the issue when it came out since she was visiting at Harvard and was listed.  Indeed, the bio is current as of 1993, listing Warren as being a visitor at Harvard, so it was not just stale information pulled from the 1991-1992 AALS directory.

Leahy also spoke with Charles W. Mooney, a law professor at the University of Pennsylvania Law School since 1986, right around the time Warren started there.  Mooney confirms Warren “mentioned that she had Native American heritage. She didn’t keep that a secret, but I don’t remember any particular context where she raised it.”

That all is hugely significant in light of prior statements by Warren and her campaign.

Warren and her campaign repeatedly have tried to direct the conversation to whether she used her alleged Native American status when applying for jobs or whether Harvard hired her because of that status.

She’s been too cute by half, and deliberately misdirecting the issue.

There would be no reason for Warren to bring up her alleged Native American heritage, it was common knowledge among her law school peers, particularly by the time she was under consideration by Harvard.  Even the students at the Harvard Women’s Law Journal in 1993 — right at the time Warren was under consideration for a permanent position — knew to list Warren as a “woman of color.”

Warren’s “woman of color” status was the classic nod-and-wink,

And as we now know, Warren’s narrative was false, and Warren never had anything more than the flimsiest basis of “family lore,” if indeed she even had that flimsy basis.

What is important is not whether Harvard made a decision based on the false narrative, but that Warren created the false narrative in the first place to put herself in a position to benefit from a minority status she did not deserve.

But that’s not all to drop today.

As reported by The Boston Globe today, Harvard likely made false federal filings based on Warren’s self-identification as Native American:

US Senate candidate Elizabeth Warren has said she was unaware that Harvard Law School had been promoting her purported Native American heritage until she read about it in a newspaper several weeks ago.

But for at least six straight years during Warren’s tenure, Harvard University reported in federally mandated diversity statistics that it had a Native American woman in its senior ranks at the law school. According to both Harvard officials and federal guidelines, those statistics are almost always based on the way employees describe themselves.

In addition, both Harvard’s guidelines and federal regulations for the statistics lay out a specific definition of Native American that Warren does not meet.

The documents suggest for the first time that either Warren or a Harvard administrator classified her repeatedly as Native American in papers prepared for the government in a way that apparently did not adhere to federal diversity guidelines. They raise further questions about Warren’s statements that she was unaware Harvard was promoting her as Native American.

There is more out there.  We just need to open the crack in the wall a little more.

We need to do it since, as Howie Carr notes, we are dealing with a Massachusetts electorate:

Meanwhile, what I found most interesting in the new Suffolk poll numbers was not the Warren-Scott Brown dead heat, but the fact that 49 percent of the electorate still believes that this fraud has Native-American blood.

Forty-nine percent — now we know the moonbat baseline in Massachusetts. And to think that they call themselves “reality-based.”

1 – Someone needs to do a bit of research on how much Federal Funding Harvard received during the period of time that they were claiming Warren as a woman of color. EEOC audits can be a nasty thing.

2 – I happened to catch the video of the local reporter that was pestering Warren…. and she made a great comment about Scott Brown’s votes were harming middle class families. That could be a defendable position, but I’d love to see an ad campaign outlining how Warren’s regulatory involvement with the Consumer Protection thingy has done actual harm to families through higher fees, less access to credit and so forth – now that’s a serious vulnerability if it’s handled in an easy to understand education formula.

The Boston Globe publishing this story on the front page at this time will probably have more negative impact on Warren than all the blogs written about her to date.