What would Teddy say if Obamacare goes down?

What would Teddy say if Obamacare goes down?

I’m not predicting that the mandate or the entirety of Obamacare will go down at the Supreme Court.  But based on the oral arguments, those who support the law are in a state of panic.

Digging back into Memeorandum from March 23, 2010, when Obamacare was signed into law, is like opening a time capsule of an earlier civilization which somehow did not survive.

In that time capsule was a story about a note Patrick Kennedy left at Ted Kennedy’s grave:

Kennedy’s legacy was not lost on anyone who filled the East Room of the White House for Obama’s bill-signing ceremony. Members of Congress wore blue “TedStrong” wristbands in his honor and posed for pictures with Patrick Kennedy. Caroline Kennedy, the senator’s niece, sat in the front row, with other members of the storied family. Vicki Kennedy walked into the room with House Speaker Nancy Pelosi (D-Calif.) and Senate Majority Leader Harry M. Reid (D-Nev.).

Obama received a thunderous applause when he evoked the ghost of Ted Kennedy near the climax of his speech.

“I remember seeing Ted walk through that door in a summit in this room a year ago, one of his last public appearances, and it was hard for him to make it, but he was confident that we would do the right thing,” Obama said.

When Obama sat to sign the bill, Patrick and Vicki Kennedy stood behind him. Finally, Ted Kennedy’s dream became the law of the land. 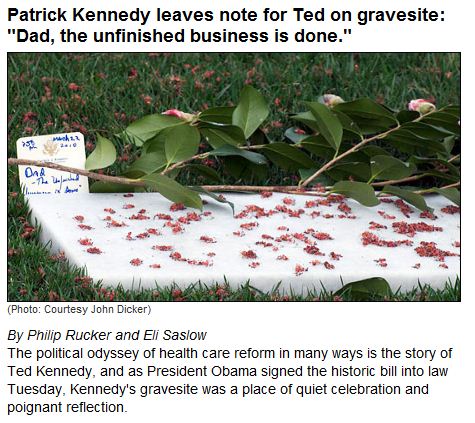 I wonder what Teddy would say about a court which gave meaning to the federalism embodied in our Constitution and placed some limiting principle on the expansion of federal power.

Actually, we have a good idea what Teddy would say, from another time capsule from an even earlier civilization:

“What would Teddy say if Obamacare goes down?”

Who gives a shit?

What would Mary Jo Kopechne say if she knew Teddy would leave her to die and never be punished for killing her?

No priest can absolves the Kennedys for that crime. It is immortal.

[…] Justice Kennedy vote to uphold (will Ted Kennedy attend the next Michelle Obama diet lecture?) the Obama health scam? The L.A. Times doesn’t think so because of the number, the targets, […]

Newt spoke at Georgetown University. The main topic was Social Security and Prosperity. But he also talked about the Sovereignty of the American People and the fiction of the “supremacy” of the U.S. Supreme Court.

Whatever the Court does in the Obamacare case, we must end this destructive notion that we are ruled by nine lawyers.

Robert Bork talked about this illegitimate aggrandizement by the Court in his brilliant book, “The Tempting of America.”

Our country is a Constitutional Republic. The Supreme Court is supreme over the courts; not the People, the States, nor the Executive or the Legislative branches of the government.

Newt at Georgetown:
“You are personally sovereign. You loan power to the State. The State does not loan power to you. This is very fundamental to the nature of being an American.

It’s actually a large part of the debate at the Supreme Court right now. It was stated that way, by Justice Kennedy, in one of his questions. He said, “this is, this idea that the government can mandate everything you do, in fact, is a dramatic shift in the relative power of the citizen and the government.”

So historically, the people who founded this country, in fact had a very clear vision. They founded it in response to what they saw as tyranny.

[…] [T]he number two argument of the Founding Fathers was over judges. Because they saw the British judges as imposers of dictatorship on behalf of the King.

And that’s why they took a number of steps to limit the power of judges. That’s why Alexander Hamilton, in the Federalist Papers, writes that the Judicial Branch is the weakest of the three branches; that it could never take on the Legislative and Executive Branch because it would inherently be defeated by them. […]

Jefferson, when asked if the Supreme Court was in fact supreme, wrote, “That would be an absurdity”; for nine people to decide the Constitution would be for us to lose our Liberty and we’d be in an oligarchy.

Abraham Lincoln, who in part was drawn back into politics by the Dred Scott decision, by which the Supreme Court extended power of — slavery — to the whole country, in his Inaugural Address, takes the Court head on, and says, “The Court may issue the law of the Case; but they cannot issue the law of the Land.”

Because if they could, the American People’s freedom would be gone. And in fact, Lincoln refused to enforce the Dred Scott decision as President.

Now, those of you intellectually interested in this, there’s a 54-page paper at newt.org, which Vince Haley and I worked on for nine years. […]

But the fight we’re in on a values level goes much deeper.” [end loose transcript]

There is much, much more, for a dramatically better future for you and the ones you love. Check it out.

Personally, I believe they left out the severability clause by accident. Incompetence is the explanation for most such errors, especially when they were scrambling to get it passed before the demonstrations threatened to hang them all.