The film Slavery By Another Name recently was released.  It is a moving historical account of the post-emancipation enslavement by another name of blacks through a variety of segregationist and other laws and policies.

Unfortunately, but predictably, some used the movie release as an opportunity to score policital points against Republicans both past and present.

This tweet received “top tweet” status when the hash tag #SlaveryByAnotherName was trending, and reflects the narrative of the left all rolled up neatly into 140 characters or less: 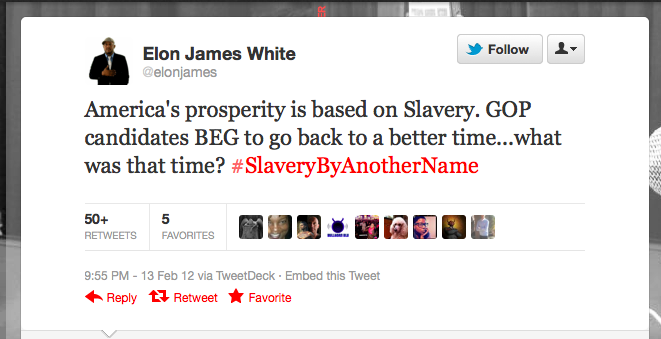 Allen West laid out a different and more honest Republican history in a speech on the occasion of Black History Month in which he recounted the history of the Republican Party on issues of slavery, segregation and civil rights.

It is a narrative which is not easily reduced to 140 characters or less, and is not the narrative taught in schools or in the media.

Ignorance, our biggest enemy, and unfortunately, our most plentiful ‘resource’ happily dispensed by the modern democrat party and their partners in the MSM.