To whom in the Republican Party is Newt beholden? (Tweet of Day added)

To whom in the Republican Party is Newt beholden? (Tweet of Day added)

I posted yesterday the spot on article by Byron York, The insider-outsider divide over Newt Gingrich, which delves into the great divide between Washington Republican political players (politicians and media) who have their noses out of joint over Newt because he was mean to them in the 1990s, and the general Republican electorate which remembers the glory days of the takeover of the House, the Contract with America, balanced budgets, and welfare reform.

There is a disbelief how a Tea Party-motivated electorate could support an “insider” like Newt, particularly an insider who did not make many friends in the Republican party and media.

I think the question answers itself.  Newt is not seen as beholden to anyone, and that is what makes his insider status non-toxic, and a plus.  He’s the insider who is on the outs with the insiders.

And, now this, let’s let Nancy Pelosi select our nominee, or at least scare us away from someone: 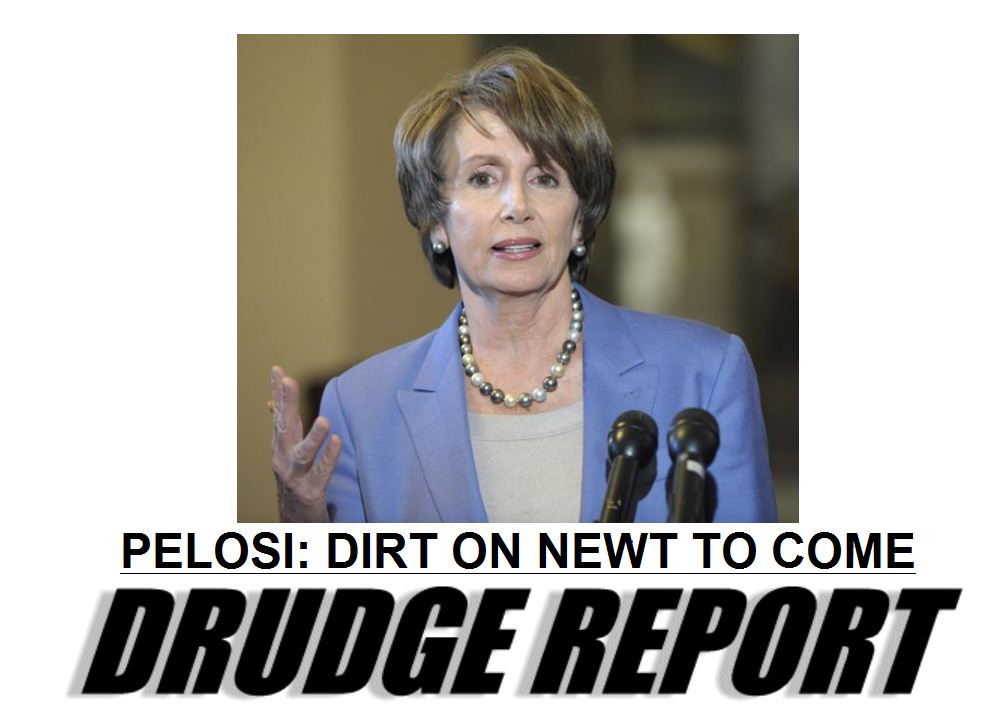 Newt’s response is at Right Scoop.

1. Will Pelosi release the “material”, or will it be leaked with a “No comment wink wink” from Pelosi? The latter may be more damaging because Pelosi can implicitly endorse lies about Gingrich without doing so explicitly.

This kind of dirty trick worked with Cain, so why won’t they try it again?

2. Gingrich’s elation over his Christmas present is premature. He may need a stronger response to Pelosi than citing House rules. He is correct on the merits but might be portrayed as taking refuge in a technicality.

3. Invocation of House rules would more appropriately be made by a senior Republican Representative, even Boehner.

(If Pelosi releases confidential proceedings of the ethics committee, I would fully support expelling her via a party-line vote no matter how much the Left squeals.)

Newt’s defining characteristic and fatal flaw is the he morphs into whoever he has to be to convince whatever audience he is speaking to that he not only agrees with them but that he is the smartest guy in the room.

Republicans and “conservatives” suffer the same tunnel vision that the liberals suffer in seeing only what they want to see and hanging out in echo chambers of their choice. That works in Newt’s favor because by choice, most of us only see the Newt that talks to audiences in our echo chambers.

Newt is beholden to Newt and only to Newt. He is an accident looking for someplace to happen. It is a mathematical certainty that it will happen but it may come too late when Republican voters have already committed to holding their noses only to discover what a mistake they made.

Since we have yet to cast a single vote, I am holding out hope that the polls are as wrong this year as they were in 2008 when at a similar juncture Juan McCain was leading me by only 5%. Factoring in the margin of error, we were in a statistical tie. Otherwise, I will again vote “none of the above” as I did in 2008. I have principles I stick to, especially the Pasadena Phil Rule: I don’t vote for Democrats or liberals, especially when they run as Republicans.

A “None of the above” vote is a vote for Obama. Do you like him better than Gingrich, or Romney, or any other Republican?

Principles are great, but they must be tempered by reality. There are lots of Republicans I would prefer to the current candidates, but they’re not running. So, I will choose from those that are running. And, regardless of who is the nominee, I will voter for him or her over Obama.

If Obama is reelected, our country is doomed. Will that make you feel good about your vote for “none of the above”?

I’m in the ABO camp. And if that’s Newt, fine by me, couldn’t stand the man in the 1990s. I voted for Clinton both times, but the Newt very well may the man who doesn’t give a damn about these elietist media types, and that appeals to me.

And I listen to him, not the professional idiot pundits, some off what he says makes sense, some doesn’t, but all it is a hell of a lot better than that idiot currently in the White House.

I read on another PUMA blog, “Newt’s an SOB, but at least he’s our SOB”. Sums it up for me.

I’m not anti-romney, but he needs to up his game, most indpendents like me want that fraud Obama evicted next nomvember, and whoever can make the best argument that they can beat him gets my vote. And oh yea, the whole Romney buildup, wait until if he gets the republican nomination, every “main”stream media outlet will pounce on him, just like they did on “maverick” Mccain the day after he won the nomination, remember the NYT front page unsubstaniated story about the affair with a lobbysist?? I finally understand how this game is played by the liberals, and I’m a former liberal saying this.

I am very conservative and have been for a very long time. I am also firmly in the ABO camp. Seems to me our camp is getting pretty big. Good!!