“Tax returns for college transcripts” will not work

“Tax returns for college transcripts” will not work

The second Mitt Romney announced he would not release his income tax returns if he becomes nominee I predicted it would not stand because the refusal would, at a minimum, create a major distraction.  It’s part of a larger problem with secrecy which will haunt Romney if he is the nominee.

The most likely scenario is that almost all of Romney’s income is taxed at the 15% long term capital gains rate, playing right into the hands of Team Obama in its Secretaries versus Bosses campaign theme.

Many commenters here believed Romney was setting a trap for Obama to complain, since Romney could say something along the lines of “I’ll release my tax returns when you release your college records….”

And indeed, one of Romney’s sons tried that line yesterday but stepped in it because he demanded not only college transcripts but Obama’s original birth certificate.  Feigned outrage followed, of course, from Team Obama.

The “tax returns for college transcripts” approach will not work.  There are effective ways to question Obama’s narrative, but holding the Republican nominee’s tax returns hostage is not one of those ways.

Romney has run a pretty brilliant campaign so far, so it it hard to understand why he is walking into this dead end alleyway.

The tax returns already have become an issue on which the left-blogosphere and Obama campaign are focusing: 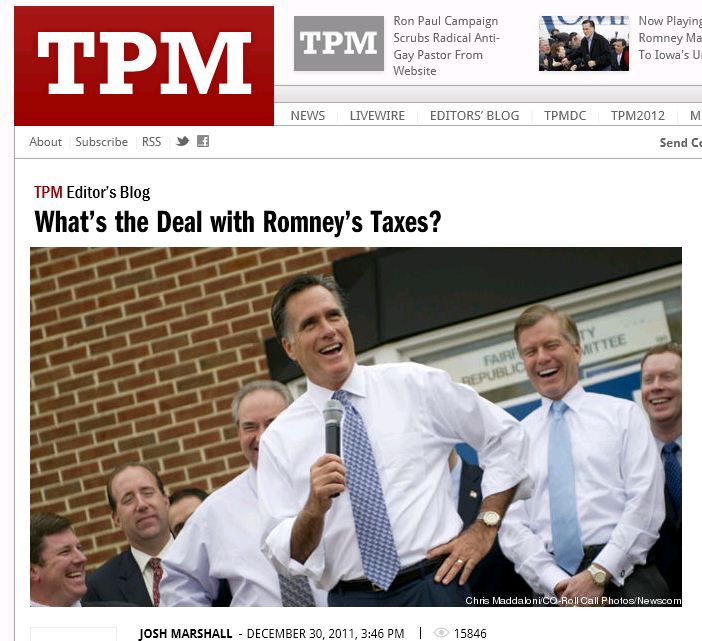 Marshall finds the same issue I did:

We already know Mitt Romney is a really, really wealthy guy.  But there have been a lot of rich presidential candidates.  And, though he was born to wealth, Romney also made a lot of money himself.  He’s also said he’ll release information about his wealth, his assets … a lot of stuff.  But just not the tax returns.

So what’s the deal?  It’s pretty simple.  We might say that a specter is haunting Mitt Romney — the specter of the Buffett Rule.

There is no worse question for a presidential candidate than “what is he hiding?”

So what is Romney hiding that is worth having the conversation be about his refusal to release income tax returns rather the disaster known as the Obama presidency?

There is no worse question for a presidential candidate than “what is he hiding?”

Let me fix that for you.

There is no worse question for a Republican presidential candidate than “what is he hiding?”
.

Thank you for fixing that.

Romney plans to be the nominee. The republicn establishment plans on Romney being the nominee. They have to know the media will tear Romney apart if he wins the nomination. This could be a carefully crafted plan to make the media focus on this pretty exclusivelyor at least the top of the pile and release the returns during the week before the election thus leaving the media with egg on their faces. I doubt there will be any law breaking in them. He does, after all, hire accountants to do these returns and they have to obey the rules or lose their business and/or go to jail. If he has given a lot to charity, he could compare his giving with obama’s which is probably nil. H*ll, he won’t even help his family living in extreme poverty. The only help he has given them didn’t cost him a dime. It cost us (his aunt and uncle here in the US), you understand, but not him personally.

However, I will go with the theory that obama will leak the returns. He has never been hampered by ethical behavior or the rule of law or, indeed, the Constitution. He uses the office of the president much like Clinton did for personal revenge.

In case anybody wonders, I was talking about obama not helping his family.

I find it hilarious that obama is using class warfare trying to make the rest of the country hate the rich when the whole point of the US freedom and liberty is for everyone to get ahead as much as they can. Everyone in the country is trying to better themelves and become rich if possible. The half that is working, that is. This just shows how dumb the dims think we are. They are tryng to make us jealous of the people who have succeeded and the dummies who fall for this garbage don’t realize that if they become rich, they will be lumped in with the rest of the hated rich.