WMUR in New Hampshire, CNN, and Huntsman’s website are supposed to have the livestream.  If I can get an embed code, I will.  There also will be a Live Blog at The Fix.

It’s supposed to be about foreign policy, but I can’t imagine it will not stray into discussing the primary contest and domestic policy.

Huntsman has been extremely aggressive in going after Romney, and needs to score some points against Romney.  Given how Romney has been dumping on Newt for the past week, I can’t imagine Newt is going to try to stop Huntsman from going there.

This CNN article summarizes the state of Iowa polling as of this afternoon, with two new polls out one of which shows some softening of Newts lead another of which shows it steady.  He seems to do better when “somewhat likely” voters are added to “likely voters.”

I will not get to watch it live due to other commitments, so tell what happened (in the comments).

Post Debate:  I only heard the last few minutes and the ending.  The moderator joked at the end that he’d bet $10,000 that Obama would not take Newt up on his offer of 7 three hour debates, and the crowd laughed.  Newt’s response was “You just showed who the real loser of this debate was,” and he wasn’t referring to Obama.  Romney bowed out of a one-on-one with Newt in New Hampshire, and while this debate probably did not receive a lot of national attention, it probably received a lot of attention in New Hampshire.   This was win-win for both Newt and Huntsman.

I’ll listen to the full debate later, but from what I’m gathering on Twitter it was very informative, and allowed both Newt and Hunstman to show off their knowledge.  (Added, Jazz Shaw has a summary.)  Here are some tweets from people who did listen, including Doug Mataconis who is hostile to Newt: 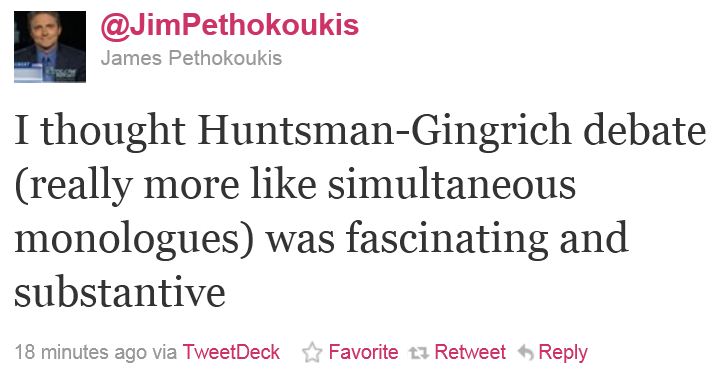 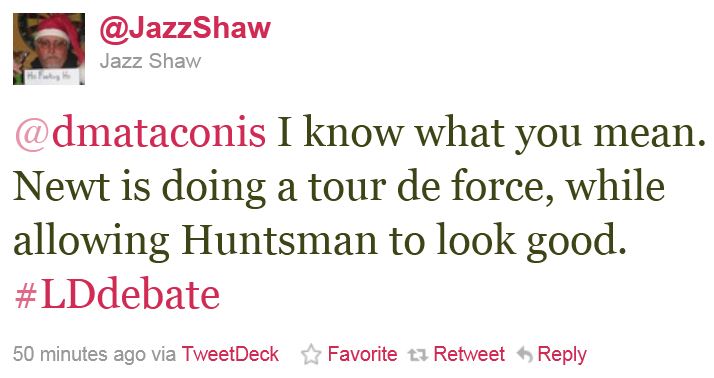 Huntsman speaks much better than Romney, but his facial expressions are just as fake.

Thanks for the real-time links, Professor.

Huntsman got a lot better as his nerves seemed to calm, and as he started getting opportunities to show off his knowledge of Asian politics. Sometimes he veered into asides and tangents to do this. Given Huntsman’s relative standing in the polls, though, compared with Gingrich, it seemed (especially in the mutual flattering comments by both participants, notably at the end) that it was more of a joint educational lecture and problem-defining presentation than a “debate”. (I had a couple of gaps in my viewing for work interruptions, so if there was significant debate-type disagreement, I may have missed it.) For a moment there in Huntsman’s closing remarks, though, I thought it sounded like a set up to urge the voters to vote for 😉 …a Republican. I hope it makes the appropriate impact in New Hampshire.

The 20ish minute segment I saw was informative and substantive for both candidates. Down side for Huntsman was he looked “too polished” and wouldn’t look directly at the camera(s), and so seemed a trifle disingenuous or – almost – furtive at times. Strange. Other than that home runs for both = and for the college.

Professor if you hunt up a link to the full debate can you post it please ….I thought the one Newt did with Cain was a smasher and would like to see how he did here