Spotted in the People’s Republic

Spotted in the People’s Republic

of Ithaca. My first worthy bumper-sticker sighting where I had my cell phone handy! 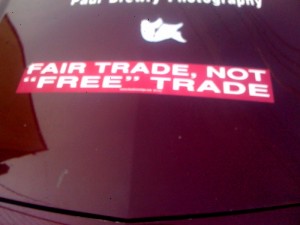 This doofus probably thinks that labor in the Third World is involuntary and that people in impoverished countries have the option to say, work a cushy job making artisan purses with colorful beads if only sweatshops weren’t an option. This is, of course, a developed world projection:

Contrary to what you have heard, sweatshops in third-world countries are a good deal for the people who work in them. Why? Because work, other than slave labor, is an exchange. A worker chooses a particular job because she thinks herself better off in that job than at her next-best alternative. Most of us would regard a low-paying job in Nicaragua or Honduras as a lousy job. But we’re not being asked to take those jobs. Those jobs are the best options those workers have, or else they would quit and work elsewhere. You don’t make someone better off by taking away the best of a bunch of bad choices.

But this particular car got better. 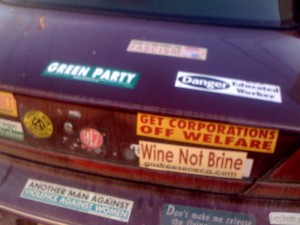 “Another man against violence against women”; “Danger: Educated Worker”; “Get Corporations off Welfare” (drat, I agree with that one); “Green Party”; “End American Fascism”…

Oh Ithaca, this was a treat.

You can always tell a leftist’s car. They have the largest number of the most arrogant bumper stickers of anyone on the road…

…with the possible exception of Ron Paul supporters.