The woman who accused Herman Cain of something and got a check from the National Restaurant Association is refusing to provide any details of her complaint even though the NRA released her from her confidentiality agreement.

So how does Politico spin this refusal to break her silence?  Herman Cain allegation: Accuser breaks silence: 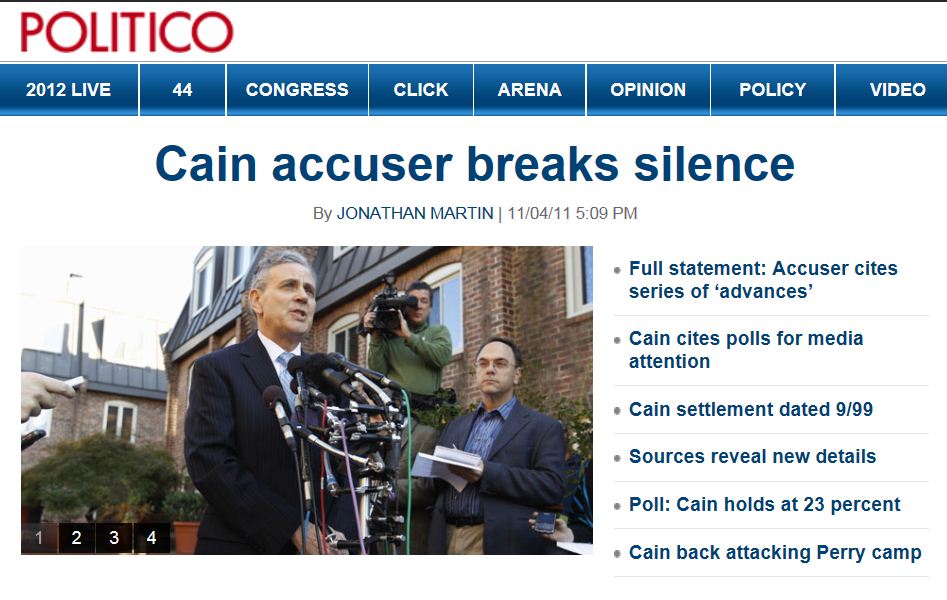 What was the Movie witg the
“Follow The Money!” ?
Suppose the accuser was angling for an exclusive jackpot but just got deflated by the NRA release??
http://www.americanthinker.com/blog/2011/11/high-stakes_chess_may_backfire_for_cain_accuser.html

I did really enjoy the Mark Levin hit on Politico this evening for the playing this cattoy game about Cain but ignoring the descrimination and sexual charges of the Gay guy against Jesse Jackson.

The underlying main complaint against Cain at this point is that he and his campaign organization don’t have a Clinton grade “I’m guilty therefore I need to focus on how bad the victim was” Spinmeister. Thankfully.

I was negative about Politico from 2008 election till a month ago. Then I found out about its links to WaPo. I have to remind myself that the Columbia School of Journalism was started by Progressives who ‘went underground’ at the end of
“The Progressive Era” when it failed miserably with the Wilson Administration.

Lest any contemporary GOP Moderates think “Progressives” is a feature of “The Democrat Party” they need to know it was a 50/50 split from the 1911 REPUBLICAN PARTY that with the 1912 Election created the……..poop…we are enduring today.

Well, now we know what they’ll try to push if Cain gets the nomination.

Look for this to resurface about september ’12.

This whole Cain thing was a non story from the beginning. The more our side comments on it, the more their side [the liberals] will comment on it. Stay focused on “Fast and Furious”, Solyndra and now, Jon Corzine as the “Wall Street” democrat politician who ripped off the “99%” [ of whom, 47% don’t pay any taxes ] by showing the video of Obama praising Corzine at a campaign rally. Focus on that!