“Not Presumed Innocent Until Proven Not Guilty” Tweet of the Day

“Not Presumed Innocent Until Proven Not Guilty” Tweet of the Day

Posted by William A. Jacobson Thursday, November 3, 2011 at 11:21am 31 Comments
More Sharing Options

From Jim Treacher of The Daily Caller: 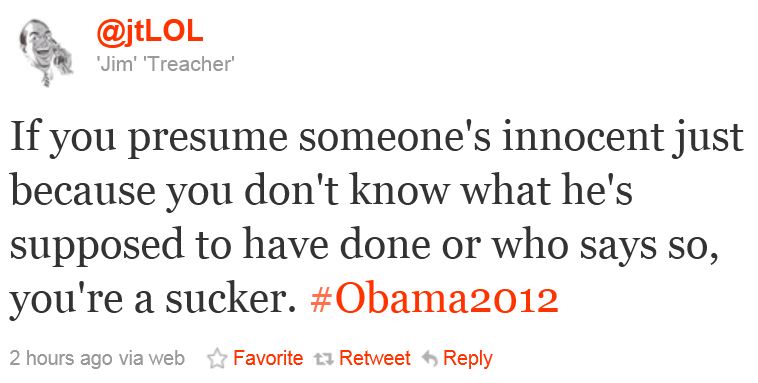 Doesn’t it bother anyone that the Left makes the standard for whether something is “bad” if it merely makes some random woman uncomfortable? They purposely make the standard ARBITRARY and then appoint themselves the arbiters of whether something is worth reporting. It’s an instant recipe for not reporting slanderous complaints about Bill Clinton or John Edwards or Algore…but for ABSOLUTELY reporting every jot and tittle about any and every Republican.

The media is corrupt. The sooner Republicans start explaining to the American people about the true nature of that corruption in a good-humored way, the sooner they will prevail. Until then, we’ll continue to play their game by their rules and then we’ll wonder why we keep losing.

To the ‘conservative’s who are inadvertently or deliberately rooting with the Left for the downfall of a Conservative candidate in an already weaken field of nominees + tenuous attempt to unseat Obama:

You’ve been infected if you think Politico’s retro-fitted story is a boon to a not-Cain nominee.

Want to bet if Obama’s polls doesn’t recuperate since all media attention has turned from Solyndra, the economy, OWS to Cain? They are playing us.

Who shall come to the defense of your candidate (or do you even have one?) when the media has digested cain and devours Newt and Perry?

If you prefer to pick your candidates based on the haphazard hearsay of media complex that’s dedicated to destroying all Republicans over studying the candidates performance at the debates + local appearances…than I’m sorry to say the Left has succeeded. The Republican Primary has been Fully Hijacked.