Most Brutal Debate Video and Tweets Ever

Most Brutal Debate Video and Tweets Ever

Full report on CNBC debate here.  The only part that will be remembered is Rick Perry’s freeze on stage.  He was having a reasonable debate until that point.  I feel sorry for him.  One freeze on stage should not end a campaign, but the reaction will be brutal because it fits into a narrative of prior debate failures.

Speaks for itself. It is what it is.

Here is the video clip and the simultaneous reaction by three people on Twitter:

And now the Tweets: 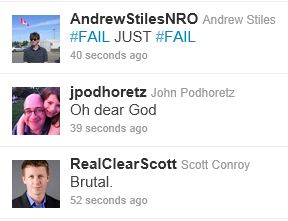 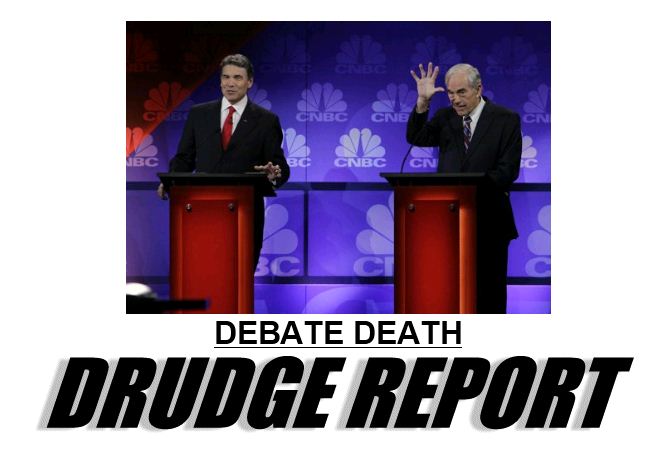 Via HotAir, this reaction as to whether fundraisers will lose faith:

And because I cannot resist saying: The Plot thickens…

“Aaron Blake, a reporter who blogs at the Washington Post’s political blog, tweets:

Top Perry fundraiser to me: “Perry campaign is over. Time for him to go home and refocus on being Gov of TX.”

This comes on the heels of an earlier report by Politico blogger Ben Smith who was sent this email from a prominent Perry supporter:

stuck a fork in himself

can’t decide which is worse Dean scream or Perry oops

bourbon for me, i think”
[from HotAir and the Weekly Standard]

And I have to say, nice to see a prominent Perry supporter being so gracious to Howard Dean, poor fella. And the generous rehabilitation of Gerald Ford just warms the cockles of my heart.

Don’t worry the good professor will be leading the passionate charge in due time. In the meantime, we will have to endure the mindless rants of jubee doobee while Rome burns.

The only think I can add to this conversation is…..debate is essential to defeat Barack Obama. Newt is a master. Like him or hate him, he has the debater’s gift, and the sharp intellect, the deep knowledge, and experience to use it to great advantage.

Obama is a trained community organizer, who knows how to stifle, obfuscate, spin, and just generally tell people what they want to hear; he can do that IN HIS SLEEP. That is what he studied all his life. That is all he has done all his life. His U Chi teaching stint was teaching Alinsky community organizing to students. And, if you go back and watch him, he has the ability to use those skills well.

He has no need of a teleprompter after debate prepping for hours every day; which is a guarantee, since he has such a busy schedule lately.

And he won’t do much else, come debate time. Not like the world isn’t falling apart: European economy crashing, our economy is in the deepest hole since the Great Depression, unemployment is over 9% (real unemployment – not the massaged MSM number), or anything really serious. Not to mention the anarchists in the streets, rioting and getting a pass from leftists. Or Iran going nuclear in the near future. By then, there might be much worse – but he will train and drill on debating the Republican candidate. He will sharpen his knives well.

Priorities! Gotta focus on those debate skills. Memorize all those zingers cleverly created to give the MSM sound bites to repeat ad nauseam.

That is why debate skills and performance matter. Perry has to have a FANTASTIC next debate, or he will fade; his message will not be heard, due to weak communication skills – as illustrated in these debates.

“Priorities! Gotta focus on those debate skills. Memorize all those zingers cleverly created to give the MSM sound bites to repeat ad nauseam.”

And that’s the problem. I think Perry supporters are, not unreasonably, looking for their candidate to be judged on fair, impartial grounds, when the reality is that in modern politics, they won’t be.

I am sorry but that is utter nonsense. There was nothing special about Obama’s debate performances in 2008 and I doubt it will matter what Obama says in his debates in 2012.
In politics, perceptions and projecting (seeing the candidate as ourselves) play a greater part than in years past. There was nothing special Carter said in 1976 that earned him the Presidency. The perception was he was an outsider going to clean up Washington after the Watergate debacle. Being a ‘good’ Christian man, he also played into the projections of many voters. Carter lacked substance but the voters took the flyer.
In 2008, American homeowners were taking a financial beating (which really began in 2006). They made the GOP pay the price in 2006, losing the House and Senate. In 2008, there was open hostility towards DC (which still exists today-which is why Newt and Herman don’t play up their roles as DC lobbyists). McCain and Hillary were seen as DC insiders while Obama was seen as an outsider. The voters bought the pablum Obama was selling and took another flyer.
It will not be an easy ride for Obama in 2012 as he has to run on his record.

We used to put a premium on political executive experience and leadership. Not anymore. Once again, we put our political blind faith in folks who have to meander through the minefields of debates. It has become a cross between American Idol and your average reality TV show. Throw in the need for instant gratification and we lose sight of what is important.

We do not need to make Obama to be larger than life. He is a mean, petty, and small man. All this sturm und drang over the GOP debates is nothing more than isolated ‘gotcha’. If this is what loses a candidate support, then it says more about the supporters than the candidate.

Don’t think I’m picking on you — I’m not. But what you just said is a perfect example of the problem we face.

I’ve read quite few comments here & there to the effect of: “I think Perry would be the best president but I can’t support him because … ”

This what you people need to get through your heads: This is NOT American Idol. We don’t have or want a bench of self-appointed judges telling us who gets run and who should go home. We must not have that.

Politics in America is not a spectator sport!

And yet, here you are, treating it as exactly that. A bunch of people who despise you and everything you think is good and right come up with a media-circus-cum-game-show and you fall right into line!

You get behind these people and you say; “Yup, them’s the rules. Priorities! Gotta focus on those debate skills, yessir. That’s the ticket!”

What the hell is the matter with you? Do you really seriously think that a game show is the way to pick our next president? You lay out the crises we all face and then you decide to endorse the American Idol model for deciding who should run and who shouldn’t?

You are not watching American Idol. You are not a spectator sitting at home, being entertained and buying into their rules.

You are voter. Sovereignty is vested in you — not the game show hosts.

Do your job, dammit.

I tend to agree. While the ability to get elected has to be our first consideration (it doesn’t matter what a candidate will do in office if he never gets into office), the ability to effectively govern has to be a close second. Do we really want to put ourselves in the situation Democrats are now in- nominating someone who can win but can’t do the job he just won (as the SCOAMF is)?

Debates are nice, but of limited value. If they were determinative, W would never have won an election. They don’t much evidence the ability to run an effective campaign, nor how one will govern or deal with all the assorted controversies the media will manufacture. I’ll go ahead and clue everyone in, unless Newt wins the nomination, Obama will be declared the winner of each and every debate, regardless of what is said or done. And even if Newt destroys him each time, the press will find a way to portray each victory as a stinging loss. They are all in, and will be long after election day.

The ability to handle press-manufactured scandals (such as the current Cain debacle) is going to be far more critical to our eventual nominee’s success than any debate. That’s because the media and the Democrats (but I repeat myself) will pummel him weekly with them. They can’t make him take a position or piss off his base, but they can slap him with the stink brush every single day. And our guy is going to have to be adept, hell, he’ll have to be downright heroically gifted, at dealing with this stuff.

We’ve got one guy in the race right now who has shown he is utterly not up to the task.

Not to disagree — because I don’t. But my issue the “ability to get elected” being our first consideration is that people are treating it passively. They are sitting around acting like they are not in this game, trying to guess what everybody else thinks.

And based on their conclusions about that, they are deciding who is “electable” and who isn’t.

The problem with this approach is 1) that is hard thing to figure out reliably, 2) they really suck at it, and 3) it’s misguided.

So pick the person you feel will do the best job and explain rentlessly why they are the best person, and explain why the media manipulations, the blood-and-circuses, the phoney debates are not proper ways to evaluate candidates.

Start with what we can assess (with some reasonable accuracy) and use that to push electability. Don’t sit there passively, listening to a lot of nonsense, saying — as no small number explicity — the so-&-so is really the best person for the job but “they aren’t electable” because the enemy has told you repeatedly they are not electable.

The enemy want us to think no one on our side is electable. And we read exactly that again and again: “Weak field — everyone sucks — no real [….] — not electable” for no other reson than they they have been told that over and over again.

If we are going to get out of this mess we need people, not parrots. So people need to get off their butts and act like they in this game, because they are.

[…] when he froze up on the agencies question. Up until that point, he was have a very decent debate. Yikes, this might be the end for him. I was really pleased with Gingrich. His knowledge base is unmatched. Newt owned the moderators […]

Let’s all face facts here. The next President of the United States is not among the current Republican line up. None of them have the capability of beating the moron that currently resides in the White House. It is a weak group. Cain, has been Clarenced, successfully. Newt….more skeletons. Romney more like the current occupant. Perry, toast. Paging Paul Ryan, please report to the RNC immediately!

Sorry, but… I want Sarah Palin.

[…] Professor Jacobsen wrote: He was having a reasonable debate until that point. I feel sorry for him. One freeze on stage should not end a campaign, but the reaction will be brutal because it fits into a narrative of prior debate failures. […]