Check out time at Zuccotti Park

Check out time at Zuccotti Park

When I heard that NY City police had cleared out Zuccotti Park overnight, I couldn’t wait to see the NY Post headline.  I was not disappointed: 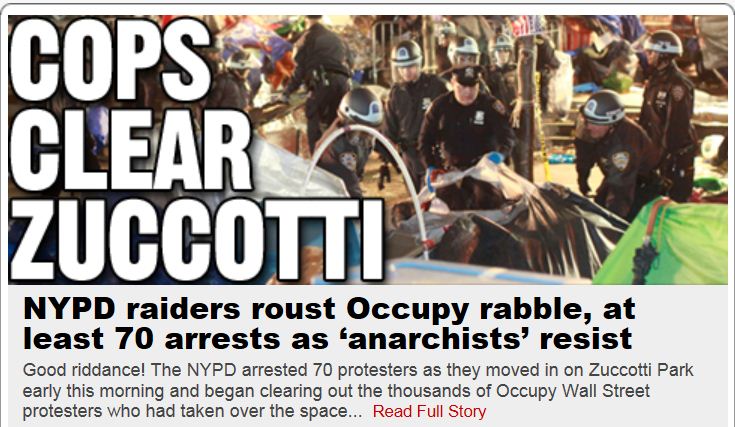 What do you think of my headline? Do I have what it takes to be a headline writer for the NY Post?

Update: Apparently a judge has issued an order allowing the camping to continue on the ground that it has gone on this long already. It’s rulings like this which give the judiciary a bad name. The next rape or stabbing is on the judge.

Update No. 2 :  Another judge, who held a hearing and gave the city a chance to be heard, has held that the city was within its rights in keeping the protesters from setting up a tent city in Zuccotti Park:

“The [protesters] have not demonstrated that they have a First Amendment  right to remain in Zuccotti Park, along with their tents, structures, generators  and other installations to the exclusion of the owner’s reasonable rights and  duties to maintain Zuccotti Park, or to the rights to public access of others  who might wish to use the space safely,” Manhattan Supreme Court Judge Michael  Stallman wrote in a four-page decision.

“Neither have the applicants shown a right to a temporary restraining order  that would restrict the city’s enforcement of law so as to promote public health  and safety.”

Is this rabble the long dreamed of “civilian national security force”? In that event, they will soon form a Union (a la the TSA) and the National Labor Relations Board will countersue any attempts to remove this collective public health hazard.

You haven’t read the papers, you did not hear the oral argument, and I assume you know butkus about Landlord-Tenant Law (including squatters rights) in NYC. Yet you still feel entitled to state: “It’s rulings like this which give the judiciary a bad name.”

I submit that one who makes such a statement w/o knowledge and based purely on political feelings, gives professors a bad name.

There is no definition that I have seen in any NYS or NYC law or code under which this situation would have created a landlord-tenant relationship. If you’re going to make positive claims, I suggest you back them up.

My claim is that Jacobson had not read the papers, heard the arguments, or was familiar with any of the applicable laws when he accused the Judge “of giving the judiciary a bad name”. He has not denied that claim. The fact that another judge ruled differently is not an excuse for an ill-informed partisan attack on the first judge. Simply not very scholarly.

For what its worth, a squatter may not be removed in New York without resort to legal proceedings , if such removal might cause violence. P & A Bros. v City of N.Y. Dept. of Parks & Recreation

You should probably read that decision more carefully, the court explicitly rejects the argument that legal process is required to remove squatters.

“The Supreme Court was simply in error that plaintiff could only be removed by legal process.”

The decision says only if the removal can take place without the possibility of violance.

All right, at this point the only plausible explanation for your ignorance is that you’re referring to the portion of the decision that discusses, briefly, NYS RPAPL § 853. I was trying to give you the benefit of the doubt. What that statute does is allow an individual who is WRONGFULLY ejected from property by force to recover treble damages (that’s triple, since you appear to be fairly unversed in the law) in a tort action. It doesn’t stop a landlord from forcefully evicting someone, it is only designed to make them stop and think, because if they’re wrong, they will have to pay punitive damages.

And, of course, this statute wouldn’t apply to the government anyway. The way you have insanely construed it, the police would have to get a court order to remove anyone from anywhere, even a home invader, and that is simply not the case.

Sorry, I was reading that wrong. Were they a squatter, and where this the action of a private entity, you would be right, force would allow for an action in tort. However, neither of those aspects apply. These individuals are not squatters under NYS RPAPL § 713 and therefore don’t qualify for the protections afforded them. And of course, there’s still the problem that this is the government, and not a private individual.

2. Why doesn’t the RPAPL apply to the government?

I was right. One didn’t need to read the papers filed by the OWS supporters to know that they had no legal right to continue an encampment where sexual assaults, violence, drug use, unsanitary conditions and disease were rampant, particularly when done in a space they did not own and had no legal right to occupy for living (as opposed to protest) purposes. Even before OWS went to court Bloomberg had announced that they could protest 24 hours per day, they just could not reconstitute the public safety and health hazards caused by the tent city. The order was issued by the first judge without giving the city a full and fair opportunity to be heard. That did not reflect well on the judiciary, and I’m glad that the second judge showed more sense.

Its called an Order To Show Cause- A TRO. Its an ex parte remedy. They are signed every day. How can it “not reflect well on the judiciary.”

You really need to spend more time in the law library and less time with your blog.

Another judge ruled in favor of the city after a hearing. The judge who issued the order early this morning acted precipitously and without justification. This was a health and public safety issue not a landlord tenant dispute.