There is no better example than “social justice,” a term which as defined by academia and the media means left-wing policies, setting conservatives back on their heels.  Who could be against “social justice”?

Thanks to reader Luke in Oakton, Virginia, who writes:

Professor Jacobson – I love your bumper sticker feature.  Here’s a bumper sticker I see everyday, well, because it’s on my car.  I can’t tell you how many nice comments I collect from total strangers.  I thought you might like to share it with your audience.

Keep up the great work and the fine sense of humor. 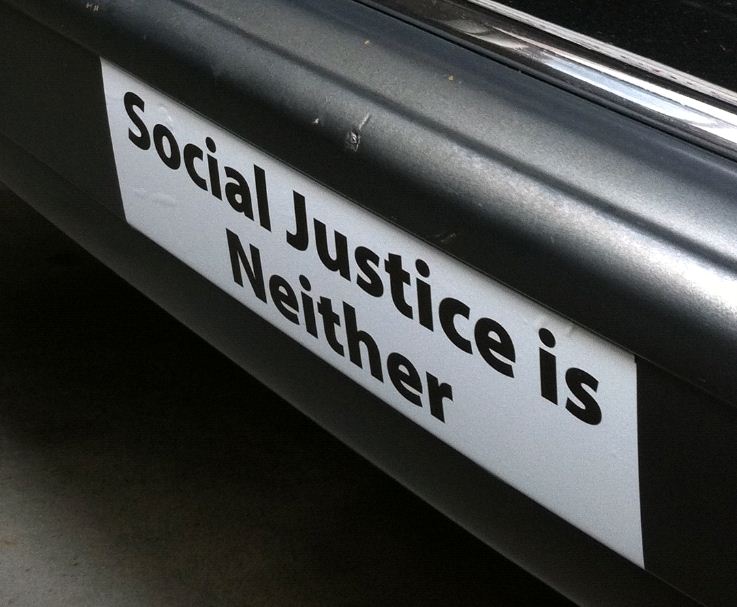 In honor of your title, here is a link to PowerLine blog related to Churchill: Winston’s Warning to Obama.

I have been asking for several years now: why does the right allow the left to define the terms and thus control the conversation? Thank you for commenting about the fact that it is the left who is defining the terms and controlling the debate; also, by allowing them to define what is “fair,” they have almost won any debate by default.

That is, perhaps, why the 2008 debates then, and the Republican debates now, were and are so frustrating. The left always wins, according to the “moderators,” because they use their terms and their definition of “fair” to create the questions, evaluate the answers, and draw the inevitable, pre-determined conclusions.

My, my Professor, how Churchillian!

I couldn’t agree more and as Karl Rove so pitifully exhibited during his time in the WH that you had better not let the opponents define the playing field nor narrative, because once the perception sets in, it is almost impossible to change.

Oh, and it sure would be nice for The West to find their inner Churchill and stand up against Islam’s demographic invasion. Islam is also using words and definitions to win their war of civilizations – try looking up the term – Islamophobia and trace its etiology.

I think that this is in fact an example of the 80/20 principle. About 20% of the US population is made up of self-identified Marxists/anarchists/anti-Capitalists, who are dictating to the 80% of the rest of us who are working hard, contributing to our communities, taking care of our homes and families, etc.

They are the 20% causing 80% of the woes we now are experiencing – including and spurred on by the current occupants of White House, IMHO.

So they are actually the 20%, not the 99%, a subset of the 47% who are moochers off the federal government.

William A. Jacobson: There is no better example than “social justice,” a term which as defined by academia and the media means left-wing policies, setting conservatives back on their heels. Who could be against “social justice”?

The concept of social justice stems from Thomas Aquinas, and is an integral part of Catholic and other religious traditions.

yes, and it should be noted:

In the chapter “The “Common Good” and What it Means” Josef Pieper a Thomist Philosopher talks about the meaning and use of Aquinas’ “distributive justice. “.

He asks, “What does it mean, then, to exercise “distributive justice”? It means: to make sure that the individual members of the population are given the opportunity to add their contribution to the realization of the bonum commune that is neither specifically nor comprehensively defined. This participation according to each person’s dignitas or capacity and ability – this is precisely each person’s rightful “due”. And this participation may not be prevented by the administrator of the bonum commune if the institia distributive, the justice of power, is not to be violated. This points to a further aspect: the “good of a commonwealth” includes the inborn human talents, qualities and potentials, and part of the institia distributive is the obligation to protect, preserve and foster these capacities

Pieper further writes regarding the essential element of totalitarian regimes:

“There the political powers claim the right to define in complete detail the specifics of the bonum commune. The fateful and destructive nature of those five year plans does not come from their attempt to increase industrial output or to gear production and demand toward each other. What is so ruinous here is the fact that the “plan” becomes the exclusive standard that dictates not only the production of material goods but equally the pursuits of universities, the creation of artists, even the leisure activities of the individual – so that anything not totally conforming to this standard is suppressed as “socially unimportant” and “undesirable”.

Above quotes are from Josef Pieper: An Anthology, Ignatius Press

Wikipedia lays out the progression of the term fairly well.

Social justice certainly took on a more political meaning lately, as opposed to a more voluntary action within a church. But even in the church, the concept that “In a sense it is true that we cannot be saved unless we are all saved”, seems like a departure from basic Christian belief of individual responsibility and accountability.

But once the government steps in and starts adopting the role of administering “social justice, equal outcome”, we get a whole new set of problems. As “unbiblical” as the term may have been at first, it turned Orwellian when used with the power of the state. There are heavenly rewards promised for free will giving, not for robbery with the promise to redistribute.

Social justice training must be why young kids don’t keep score in school basketball games … it doesn’t really matter if the ball goes through the hoop. I guess getting rid of teams altogether will be next.

Midwest Rhino (not RINO): But once the government steps in and starts adopting the role of administering “social justice, equal outcome”, we get a whole new set of problems. As “unbiblical” as the term may have been at first, it turned Orwellian when used with the power of the state.

The difference between social justice in the Church vs. government is that one is voluntary the other coerced. Also, if the principal of subsidiarity is applied, then the reciever of charity maintains their dignity, can be held accountable, and is given what they need to learn how to fish themselves. Unfortunately even the Catholic church has abandoned this principal. Federally controlled health care and welfare runs counter to this principal, however unless abortion and contraceptives are involved the Church tends to support these large and unaccountable programs. They also support unions without regard to those who may be hurt by the overreach of union power and they do not take into consideration that the union employees may be getting more than their fair share at their neighbors expense and destroying municipalities and industries. In my opinion they are contradicting the principal of subsidiarity, encouraging anger, covetousness, and greed (these are union values), and ignoring the common good. In other words their pursuit of social justice has created more social injustice.