The ignorance of the masses – Soviet flag at #OccupyPhiladelphia

The ignorance of the masses – Soviet flag at #OccupyPhiladelphia

We’ve seen this before, at the celebration of Obama’s victory in 2008, where students unfurled the Soviet flag in celebration. I chalked that up to profound historical ignorance, much like the chic wearing of Che Guevara and Mao t-shirts.

The carrying of the Soviet flag at the Occupy Philadelphia protest, by contrast, more likely was knowing, but still ignorant.

It was an insult to the tens of millions who perished under Stalin and who suffered under communist rule; carrying the flag in Philadelphia, the birthplace of liberty, was particularly ironic.  (Video here, h/t @FormerDeminTX) 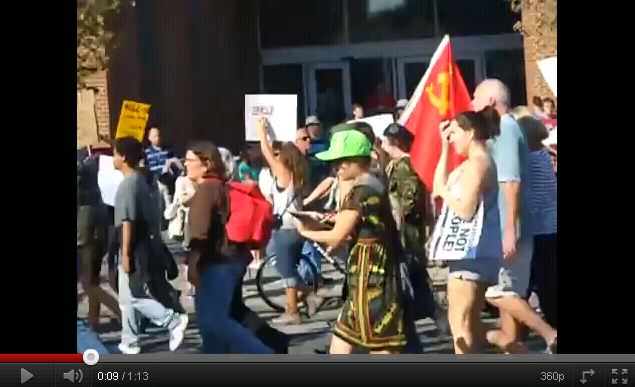 Uhh, do you think they know CCCP collapsed?

I mean, when you see a sign held by one of these intellects that reads “Who Needs Oil..I Ride The Bus”..

I mustn’t give in to temptation. I am strong, I…aw hell.

http://youtu.be/RA06Z5e1ZFc <– enjoy your facepalm compilation. This is my reaction to that…

[…] of the “Occupy” movement, then Philadelphia. I saw the following video over at Legal Insurrection of “OccupyPhiladelphia” protesters marching with the former USSR’s hammer and […]

Idiots like the ones carrying that flag always dream that they will be the ones to end up on the Politburo (oops, I mean “General Assembly”), making the world a better place.

They won’t. It’s crazy douchebags like Ayers with rich daddy connections who always end up on the Politburo. Your flag-waving ass can go dig potatoes once you’re done being useful to the cause.

0
Tea Partiers Carry the Gadsden Flag; OccupyPhilly Carries the Hammer and Sickle (Video) | All American Blogger | October 12, 2011 at 8:24 am