You need no better example of the political corruption of our mainstream media than the page 1 headline at The Washington Post, At Perry camp, racially charged name lingered. 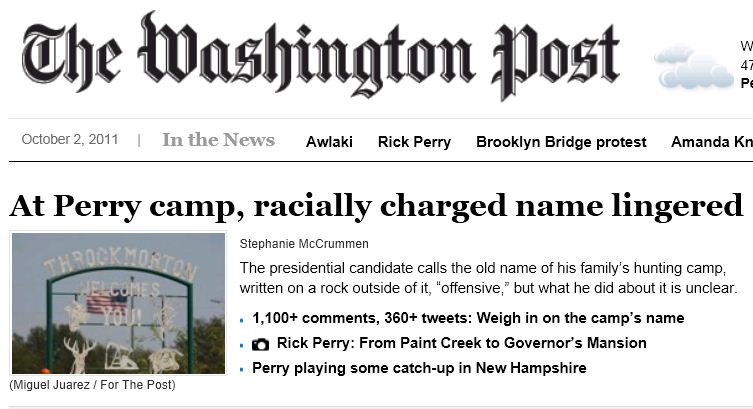 There is no story behind the headline.

The article itself reveals that the offensive name of the camp, painted on a rock near the entrance, was painted over by Perry’s father soon after they started hunting at the camp in the early 1980s.

But WaPo made sure to put the offensive word near the top of the article, so that the charge would stick in readers’ memories.  It’s not until later in the article that they state the facts.  And even then, WaPo cites anonymous sources discounting the precise years in which it was painted over, but never the fact that it was painted over.

A statement issued by the Perry campaign denies that his family ever owned the property, confirms that the rock was painted over in the early 1980s, and that the name officially was changed by the State of Texas in 1991.

I have warned people about the upcoming election, and not to take much comfort in the current polling.

Our mainstream media is biased beyond comprehension, trying to bury Obama’s 20-year association with his mentor Jeremiah Wright while putting a painted-over rock on page 1.  How many parishioners at Wright’s church did WaPo interview as to Obama’s claim that he never heard Wright’s race-baiting and anti-American speeches, even though they were sold in the lobby?

Take nothing for granted.

One thing I would like to clear up; first, only a yankee would call it a “hunting” spot. It’s a deer lease. So let me explain to you how a deer lease works:

first, you make arrangements with the owner to drive the lease. Then, if it is the lease you want, you pay for it. Most of the time the lease permits you entry to the property for a limited time, during deer season, bow and gun, and certain weekends in order to set up blinds, repair the cabin, if there is one (a cabin can be anything from a regular small house to a clap-board shack)and set up your deer feeders.

A 1,000 acre deer lease ususally has no more than 7-10 guns (that is what you call people who hunt there; guns) on the property. No one, not even wives and children, are allowed on the lease unless the owner gives specific permission.

It is quite possible, having been on a number of leases, usually down around Bracketville, Hondo or Uvalde, that once the Perrys signed the lease they were not allowed on the property for a good while. It is quite possible that Rick Perry did not know about the rock until deer season as he said he called his folks and told them about it and his mom and dad went and painted it. All of this was 28 years ago.

If anyone knows anything about rocks, you can paint them, but it will eventually wear off just from the elements. Think old barns whose paint has faded just from the weather. A rock is no different.

What bothers me is that the rock was there, painted with a word the press deems “racist” (and yes, that’s what they are indicating) and all these anonymous people knew it was there but they, the anons, never asked the owner of the property to paint it over or do something about it. Yet, they claim Perry is at fault. If something like that existed in my small central Texas community in 1983, it would have soon gotten a coat of Rustoleum.

Herman Cain tried to play the race card, and for as much as I liked him, I think it will come back to bite him. Just as it will with anyone who becomes the front runner. I thought Cain was more saavy than that. I guess not.

Cain isn’t a politician. He’s fallen several times into media traps. I don’t think this will be the last time. That’s part of what we like about him. He’s not a politician.

As to your point about Palin. It’s immaterial. The media/leftists have the long knives out for any conservative and/or Republican. They just particularly enjoy carving up an attractive conservative female.

Cain continues to be played by the media and has become gaffetastic. He nuked the fridge on this with a fellow GOP contender.

I’m late to the party on this one, but there is quite a bit more that doesn’t “play” in this story. In the first place, Throckmorton, Texas IS the middle of nowhere – by the standards of people who live “in the middle of nowhere” with a population under 1000 people. That must explain why the author didn’t actually go down to visit herself. McCrummen fails to mention that about the only industry in Throckmorton or Haskell from 1880- 1970 was farming and ranching. The oil industry expanded employment in the 70’s and 80’s, but the bust in 85 hit the smaller towns harder than elsewhere. McCrummen’s attempt to portray the community as somehow more backwards than it is or was is pathetic. In fact, it was probably a little bit better (and much safer) than living in the major cities during that era.

IMHO, McCrummen has slandered the residents of Throckmorton and Haskell Counties and owes them a public and written apology for the slander job she has done on them from 2000 miles away. I suspect that the media is about to learn that rural west Texas is about to become much less hospitable to out of towners. It’s definitely not Crawford.

As for Cain, I watched both interviews. He was well prepared, on topic, and didn’t allow the reporters to “control” his narrative. And he got hit on a “gotcha question – it was about the only weak point I saw in either interview. He did qualify his comments with “if this happened as I have been told” which at the time the only info his campaign probably had was the WaPo article. More important is whether he and Perry will pick up the phones and have a discussion on the facts without the media in the middle of it. You know that thing that grown ups do.

[…] “Reverend Wright is off limits, but a painted-over rock is page 1 at WaPo“(legalinsurrection) […]

[…] One very sharp fellow, this Cornell law prof: You need no better example of the political corruption of our mainstream media than the page 1 headline at The Washington Post, At Perry camp, racially charged name lingered. […]