I support the 3rd Amendment, and I vote

I support the 3rd Amendment, and I vote

We have covered the 1st, 2nd and 10th Amendments numerous times, but never the 3rd Amendment.  You know, the one that says, umm, you know, yeah I took Con Law and I teach in a law school, … the uh … Oh yeah:

No Soldier shall, in time of peace be quartered in any house, without the consent of the Owner, nor in time of war, but in a manner to be prescribed by law.

As noted in this article in the, er, “press” in 2007, anti-quartering groups have a long history of successfully defending our 3rd Amendment rights:

“This is a proud day for quarters-owners everywhere,” said the organization’s president, Charles Davison, in his keynote address. “Year after year, we have sent a loud and clear message to the federal government and to anyone else who would attack our unassailable rights: Hands off our cottages, livery stables, and haylofts.”

Apparently someone on my street in Ithaca is a 3rd Amendment fanatic, too: 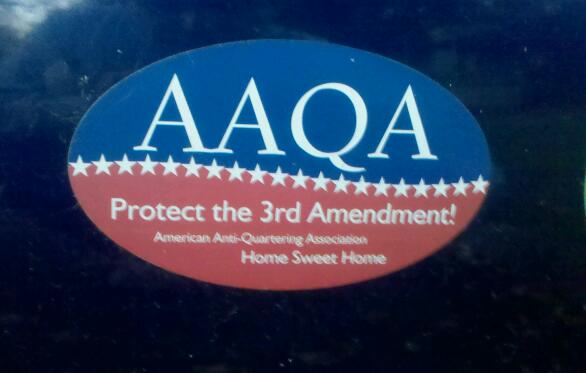 The last time my wife and I were flying, approaching the TSA checkpoint, my wife said “I should get one of those t-shirts with the 3rd Amendment printed on them in lead ink, you know, so they show up on the scans and these goons have to read it?” I said “The TSA is threatening to quarter troops in our house?”. She said “Which one am I thinking of?”. Hehe. I still tease her about protecting her “3rd Amendment rights”.

If I remember correctly there was a Thrid Amendment case back in the Sixtys. A state sued the Federal Government for using state property without permission to quarter troops flown in for riot duty. I don’t remember the result.

I think the last one before that was in the 19th Century.

[…] SUPPORTING THE WHOLE CONSTITUTION: I Support The Third Amendment, And I Vote! […]

How did that Third Amendment work out for ya in New Orleans during Katrina?

Engblom v. Carey, 677 F.2d 957, was a 1982 court case decided by the United States Court of Appeals for the Second Circuit. It is the only significant court decision based on a direct challenge under the Third Amendment to the United States Constitution.