Thanks to reader Heather, who writes:

Seen on a parked Prius in Sister Bay, WI

Oh, the comments I could make!

In forgot to tell you; on the other side of the bumper was the obligatory “coexist” bumper sticker! 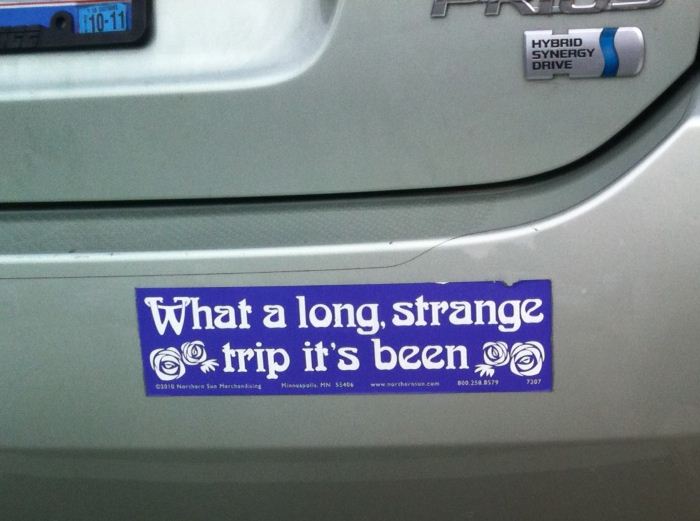 Comments, why comments about a “long strange trip” bumper sticker in Wisconsin?  Doesn’t every state have:

Update:  How could I avoid mentioning the Pink Slip?

What a long strange trip its been is from lyrics to the Grateful Dead song truckin. I know there are conservative/libertarian heads out there – come on folks…

Come on! Don’t be stereotyping us Prius owners. I didn’t buy mine out of any deep seated need to save the Earth, I bought out of pure economic self-interest. I wouldn’t be caught dead with any of those kind of stickers on my car. In fact, if they made one with a picture of an Abrams tank that said “My other vehicle gets gallons per mile” it would be there!

This is just an updated edition of that strange classic, Wisconsin Death Trip.

It’s doubtful the bearer of the “long strange trip” sticker meant to make a political statement by putting it on his bumper. What a long strange trip it is, is a common refrain spouted by Deadheads. They tend to display such Grateful Dead oriented icons, to signal to other heads who they are. I would imagine only a small percentage of Deadheads self-identify as politically conservative. Conversely, most politically conservative folks, probably don’t readily identify Deadhead icons.

I still delight in the music, but yeah, I imagine only a small percentage of Deadheads are polit-con. Didn’t always used to be, then OperationIraqi Freedom happened & I witnessed the left’s hypocrisy & it threw me into a massive change. Ex-Dem now too. In addition to being a Viet-vet, am also a veteran of 29 Dead-concerts! Am NOT appreciated on DavidGans’ GD-Hour radio-show website, when he’s gotten off into politics. Have a friend in WI, a great dude, but a nutjob pub-employee union guy also. Class-warfare & all.

Ann Coulter, noted conservative, is also a noted Deadhead. Of course, you might cite her as a Black Swan phenomenon. If you have ever seen the photos in Wisconsin Death Trip, you would take them as a relevant exemplar of the union politics of Robert La Follette’s old stomping grounds. These people are dead, almost certainly not embalmed, and are exuding the foul gases of decomposition. May they rot quickly. Without the “co-exist” sticker, one might have read this as a severe critique of Wisconsin’s recent idiocies, but with it, well . . . .