I was right about taking the debt deal

I was right about taking the debt deal

I was right when I said Republicans should take the debt deal, as bad as it was, because otherwise any negative consequences would provide Obama an excuse for his own failures.

And I was right.

Polling in the three weeks since the deal was announced has shown Obama in a perilous slide.  Here’s Rasmussen, showing the largest gap between strongly support/strongly disapprove ever (h/t HotAir): Here’s Gallup, showing how approval since the killing of Osama bin Laden has turned upside down, and how disapproval has accelerated in the past month: 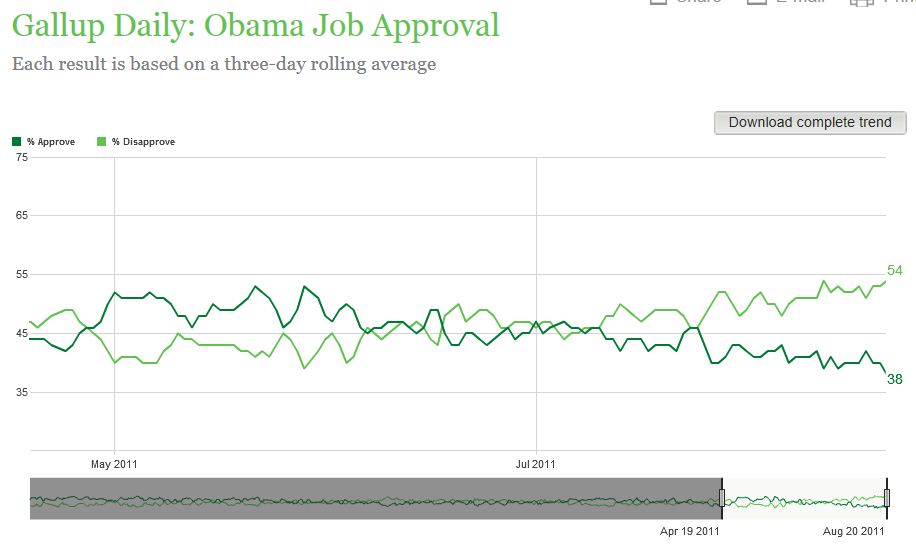 This decline is not written in stone, and surely Team Obama (Axelplouffe and MSM) will keep trying to blame everyone else.  But taking the deal kept the nation focused on the shortcomings of Obama’s policies by not precipitating a crisis which only would have served as a diversion.

Oddly enough, freeing Obama up run off to fundraisers and lavish vacations in August while the rest of the nation suffered has solidified the (correct) perception of an administration out of touch and out of control.

And we will continue having this conversation for the next several months, if not the next year.  Which is a good thing, because there is only one solution to the nation’s fiscal problems, and it comes in November 2012.  Keep your eyes on the goal.

[…] It’s almost as if Barack Obama was actually at work at the White House and the roof caved in o… The golden calf can at least say he has something in common with tween star Katy Perry (no relation to that other Perry) who had the roof fall in on her too. Tween star Katy Perry however had the roof fall in on her because she was a good sport and agreed with a fan that “pray for Israel” was a good idea. […]

I wouldn’t spike the football yet. The media and Democrats will get another chance in a couple of months to bash the Republicans and try to salvage Obama’s approval ratings when the debt ceiling Super Committee most likely fails.

Outstanding
It took MSM 8 years to drive Bush rating to -30, Obama accomplished -26 in 3. Just think what it would have been with a Truly Neutral “Journalism” Profession!
http://www.rasmussenreports.com/public_content/politics/political_updates/president_bush_job_approval

Was it “taking the debt deal” or the intense fight and argument (with the clear possibility that Republicans wouldn’t go along with White House spending at current rates) that focused public attention on the fact that the economy is so bad and the debt so big because of the President’s policies?

That the Republicans basically went along shows political competence, but not policy competence.