Soon after the raid in which Obama got bin Laden took place, as Obama was in the midst of his not-spiking-the-football victory lap, I asked readers to predict when Hollywood would roll out a major motion picture about the raid in order to help Obama’s reelection chances.

Readers predicted the weekend prior to the November 2012 election: 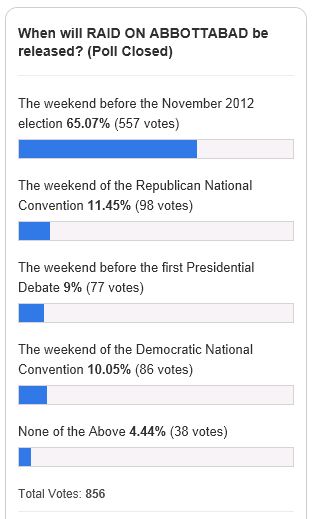 In response to the vote, I commented, tongue in cheek:

I am so not sure what to make of this overwhelming response.  Are you trying to say that Hollywood will do whatever it takes to get Obama re-elected, even an early November surprise?

How cynical of you.

I’d say readers were pretty much on target, as a Hollywood studio has announced a mid-October release of the first major motion picture about the raid, as noted by MoDo (via HotAir, h/t a reader Philip):

The White House is also counting on the Kathryn Bigelow and Mark Boal big-screen version of the killing of Bin Laden to counter Obama’s growing reputation as ineffectual. The Sony film by the Oscar-winning pair who made “The Hurt Locker” will no doubt reflect the president’s cool, gutsy decision against shaky odds. Just as Obamaland was hoping, the movie is scheduled to open on Oct. 12, 2012 — perfectly timed to give a home-stretch boost to a campaign that has grown tougher.

The moviemakers are getting top-level access to the most classified mission in history from an administration that has tried to throw more people in jail for leaking classified information than the Bush administration.

It was clear that the White House had outsourced the job of manning up the president’s image to Hollywood when Boal got welcomed to the upper echelons of the White House and the Pentagon and showed up recently — to the surprise of some military officers — at a C.I.A. ceremony celebrating the hero Seals.

I think this will backfire on Obama, because it will remind people that Obama has had only a single accomplishment in almost four years, and the rest of his administration has been a failure.

I am planning to boycott the movie studio that produces this, as well as any theater that plays it, for at least year. If Obama gets re-eected, then it will be a 4 year moratorium.

Yes, I am that pissed.

Update: We may have to usurp Newsweek’s #QueenofRage hashtag today. The elite publication is mocking Michelle Bachmann. Now, I am no big fan of Bachmann, but this is standard fare for these idiots whenever a conservative woman starts making it big. http://hotair.com/archives/2011/08/08/newsweek-keeping-it-classy-in-presidential-coverage/