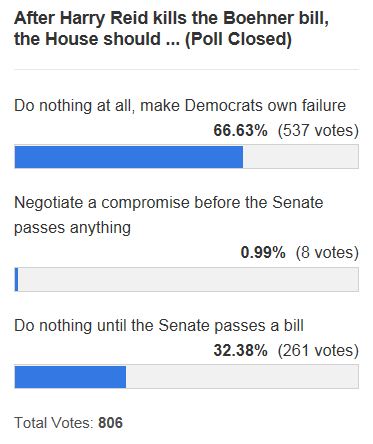 Ufortunately, ‘My Friends in the Senate’ dictates that Senator John McCain and Senator Mitch McConnell will pick up this battle declaring that fiscal conservative, small government Tea Party Americans are TERRORISTS!

One more thing Senator John McCain, though I did year after year I will never again come to the defense your military service for there is no HONOR in lies, theft, and stealing!

You, Senator John McCain join Rep Jon Murtha and Senator John Kerry in bringing SHAME to those who wear the uniform!

Picked the first…when I meant to pick the last. Was confused with the wording of the first and last option. They read like the same course of action… that is, no further action required after the bill leaves the house. It’s up to the Senate Dems, if they reject it, to either take the blame for the market’s reaction or accept it..and be blamed in 2012 for adding to the debt.

“Because if it comes back as something unacceptable, they are going to have to have the stomach to say no.”

That is the whole problem, isn’t it? At some point the Repubs are going to have to draw a line in the sand and risk a partial shutdown, or get pushed all over the playground by the bigger bully.

All this discussion about one-way compromise is a bit silly, because I think no matter what the Repubs pass, the Democrats would pick it up and make it worse.

Just to see if anyone on the Repub side has any balls.

We will soon find where they are willing to draw the line. I suspect just about where ever Harry tells them to.

It does suggest, barring a change in dynamics, that unless the Repubs control all three seats, they are in a potentially inferior position that will keep getting rolled? (doesn’t speak well to holding the line).

The only answer is to get a BBA (which I suspect won’t work either – there will always be a loophole).

There is a flip side to this question.

What should Harry Reid do in the Senate once this bill is passed? And there are two possiblities:

1) Responsibly take up the bill on the floor of the Senate, allow debate and ammendments, and send the revised bill to the conference committe with all due haste.

Guess which one I’m betting on?