Says the leaders of both parties in both chambers have reached an agreement “that will reduce the deficit and avoid default.”

Deal is $1 trillion in spending cuts, but not “so abruptly that a drag on our economy.”

Second part of agreement will have further reductions based on bipartison committee to “further reduce the deficit” and “everything on the table.”  If no agreement made, cuts automatically take place.

Also gave the usual class warfare argument about how he still believes the wealthiest should contribute more.  Also mentioned that not popular with Democrats but need to consider modest adjustments to entitlements.

And in the most important part of the statement, Obama thanked the public for their tweets.

Boehner’s office also released a PowerPoint presentation on the details of the deal (according to Fox News), I’ll post it if I can find it.  Here’s the full PowerPoint.

Here’s the slide on a Balanced Budget Amendment: 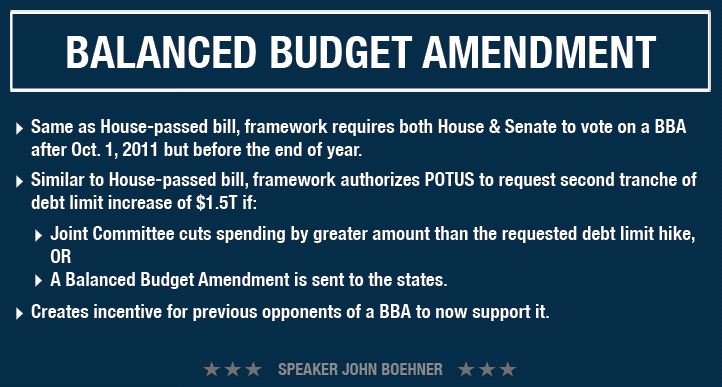 aguyfromNewJersey you have it exactly correct, get rid of the canard of 1974 Budget Act. For the Tea Party I see this as their next big issue. The ’74 Budget Act, aka Baseline Budgeting, is how all of the smoke and mirrors works. Every year, when the House budgets, it starts from last year’s budget and the assumption that the budget will increase at a certain percentage. So they start at a fictious number and therefore can declare that any increase that is less than the fictious number is a cut and any number that is larger than the fictious number is an increse/revenue/what is fair and balanced/etc. The rest of humanity, when they make a budget, start from zero, otherwise known as zero base budgeting.
Quick Aside: DC semantics need to stop, seriously, every time you hear some critter utter a nonsensical term they need to be called out and exposed for their torture of the language.
Stop Baseline Period.