while striking out at me at The Atlantic.  Read to the end to find out how and why.

I have been a critic of Green, who is the Senior Editor of The Atlantic and writes a weekly column at The Boston Globe.   I criticized Green for falsely accusing Herman Cain of  running “mildly racist” advertisements while the CEO of Godfather’s Pizza, and for his patently absurd piece blaming Sarah Palin for the media’s treatment of her.

Today Green has a post which blatantly mischaracterizes my post yesterday about David Duke’s supposed, alleged, possible run for President which was the excuse for The Daily Beast to run the headline,  White Supremacist Stampede.  As I note in my post, the source for The Daily Beast article only could identify nine white supremacist candidates in the whole country in 2010.   Some stampede.

Green, however, refers to my post as a “hysterical right wing blog post,” which he then mischaracterizes as being “about how nefarious Democrats are somehow pushing David Duke to run for president or something….”

Now I know you can read, Mr. Green, so I know you know that you are blatently mischaracterizing my post.  I never suggest that Democrats are pushing David Duke to run, I point out that they are engaging in hyperbole and scare tactics because people like David Duke are both small in number and have no connection to either the Republican Party or Tea Party movement.

Green then uses this mischaracterization to suggest, based on a Google Ad running with my post at some moment in time, that my post reflects a need for “Anger Management” services.

Now that’s an interesting use of Google Ads to prove a point, even if the point being proven is completely false and misleading.  It certainly is true that Google Ads sometimes picks up on the content of blog posts to determine which ads to run.

But there is another aspect of Google Ads which Green failed to consider.  Google Ads (via Doubleclick) tracks users histories and viewing habits, and feeds ads suited to that viewer.  I know this both generally, and also because having sought blog hosting services in connection with my switch away from Blogger last month, I’m now bombarded with Google Ads for hosting services no matter what website I visit.

You know that Google Ads is tracking the reader when a small icon appears in the upper right hand corner of the advertisement; scroll over it and you will see it is for something called AdChoices, the tracking service which feeds advertisements.  Here’s Google’s explanation of how Google Ads serves up ads based on reader viewing habits.

And lo and behold, on the image of the advertisement pasted by Green into his blog post at The Atlantic is that notice from AdChoices in the upper right hand corner (click on image to enlarge): 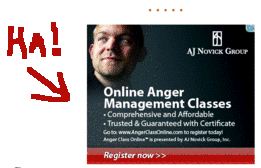 This means that the anger management advertisement likely was picked by Google Ads to serve up to Green based on Green’s viewing habits.

Of course, I can’t test my hypothesis myself, because all I see are ads for blog hosting services when I visit the same blog post: 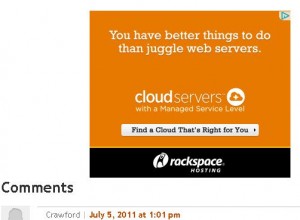 Nonetheless, Green may want to consider looking in the mirror as to why Google Ads serves him anger management ads.

I got an ad for Nextag, which seems to indicate I have eclectic tastes in stuff. On my own site I get ads for local coupons. I’d be interested in learning what my visitors see in advertising.

I’m afraid I was a little late to the parade over at the Atlantic when I posted what was only the latest of several comments over there, ‘splainin’ to Mr. Green how ad choice works on these here “internets.”

Even though I was neither the first nor the most concise, it sure was fun telling him that his laughable post was:

a little like seeing your reflection in a pool and shouting, “There he is . . . get him!”

My favorite comment, posted over there by “NoCosmologist” simply sez:

“Hmm. I get an ad for Rockport shoes. Just like the ones I was shopping for last Sunday… “

You mean you’re not in favor of cute redheads in tight tee shirts with funny art?