Taken by SoccerDad in Northwest Baltimore: 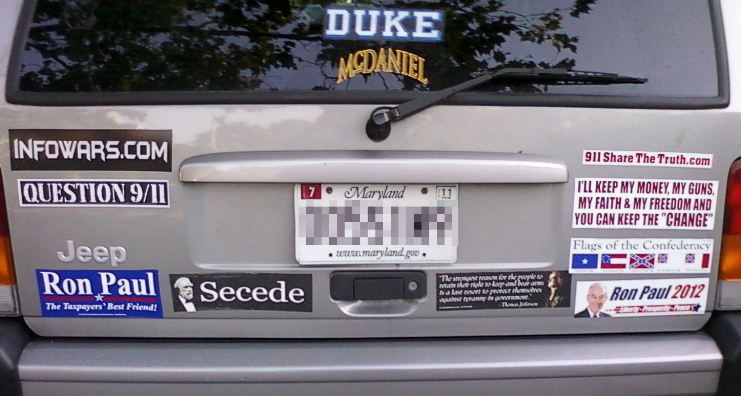 Odd that the good professor would post that photo. For weeks I have been following the articles written about Governor Perry (being myself a Texan) and the responses to any article about Perry number in the high hundreds. Sure, there are the standard “I won’t vote for any Republican” responses, but the Ron Paul/Alex Jones 9-11 truffers are out in full force. Some of the lies they tell about Perry are absolutely vile. They Palinize him.

For those who don’t know, Alex Jones is a 9-11 truffer and a Texas talk show host on top of being a pure lunatic. Infowars.com is his website. But he does have a following, and most of them are Ron Paul supporters. Conspiracy theorists, the lot of them.

Avoid them at all costs.

I’m a Ron Paul supporter, and I’m no conspiracy theorist. Can you name one position or vote by Congressman Paul that was anti-Constitutional or that grew government?

In my experience it’s a 20-35 year old male who thinks they have the world figured out and everyone else is mindless sheep. I’ve read a couple articles on infowars and I’m dumber for it.

I’m disappointed that the professor has chosen the headline that he did. Ron Paul is not a truther.

That was my point.

Just a few factoids. The bearded fellow is Robert E. Lee. The blue flag bearing the single star is the subject of the song “The Bonnie Blue Flag”. Baltimore was so full of seceshes in 1861 that Lincoln had to sneak through it on his way to his inauguration.