If you believe that “powers not delegated to the United States by the Constitution, nor prohibited by it to the States, are reserved to the States respectively, or to the people,” then you have to agree that states control their own legal definitions of marriage, and that such definitions are subject to the state political and judicial processes.

That political process in NY State was ugly at times, but it resulted in passage of a definition of marriage which, while contrary to the historical and religious definitions, likely is acceptable to the majority of people in NY State.  The religious protections built into the law held much sway, including the fact that the law by its terms may not be severed (meaning that if the religious protections are stricken by a court the entire bill must be stricken).

The political process is not over, and I would expect those opposed to the law to exercise whatever state legal and state political powers they have.  That is their right just as it is the right of those supporting the bill to seek to preserve it, and I reject the analogy to racism which permeated the argument and which was used as a political lever.

My hunch is that the new law will have much more long lasting acceptance because the political process was allowed to work, as opposed to states such as California where gay marriage was imposed by judicial fiat based on strained legal reasoning against the popular will.

The real challenge will come when those who relied on states’ rights to pass gay marriage in New York State seek to override states’ rights elsewhere.

Here is my take in fewer than 140 characters: 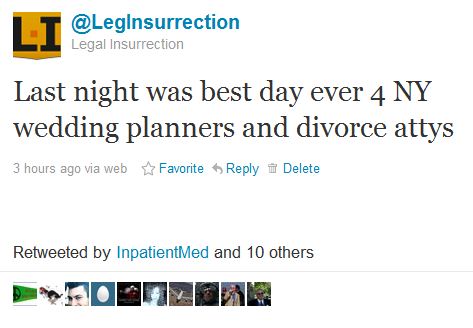 So, if my State does not honor a marriage… what would be the status of a couple who came here?
And, what would prevent them from another marriage in my State? And if they then proceeded back to New York…all four of them…

The same as if your state chooses not to recognise a marriage between first cousins, or whatever. As far as your state is concerned, they’re not married, and are free to marry other people. If they return to New York, that’s NY’s problem; presumably NY will not recognise the second marriage. Or perhaps it will accept polygamy, at least post facto, and recognise both marriages. Either way, it’s none of your state’s business, or of yours.

I haven’t yet managed to wrap my brain around the notion that expanding the role of government in interpersonal relationships is necessarily a libertarian proposition. Can someone help me?

“Or perhaps it will accept polygamy, at least post facto, and recognise both marriages. Either way, it’s none of your state’s business, or of yours.”

I read some time ago that NY is allowing benefits for additional wives of migrants by including them as dependents.