This photo of an Israeli soldier standing on a young Palestinian girl is making the rounds on the internet and evoking enormous anti-Israel vitriol: 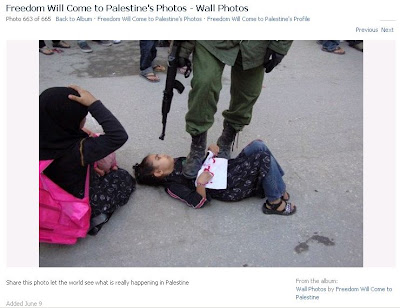 As Israel Matzav points out, however, the photo is not what it seems:

There’s one small problem – the photo is a fake.

The uniform is not an IDF uniform, the boots aren’t IDF boots and the weapon is a Russian issue AK-47 – the IDF uses American-made M-16’s.

But why let facts get in the way?

Indeed.  For more on Pallywood, the decades-long Palestinian effort to fake anti-Israeli images and news which then become accepted as fact, see my prior posts:

Expect Pallywood to move into high production as we approach the September U.N. General Assembly session.

The seething Judenhaas in the Facebook comments is far more interesting than the poorly faked photo.

Dan Rather would be proud.

Clearly you haven't spent much time at Huffington Post. The level of Israeli hatred, anti-Semitism, and dishonesty (sorry for repeating myself) is completely off the charts. I am almost afraid to go over there to see the discussion, if any, on this photo.

Why let the truth get in the way of bashing the only free nation and real U.S. ally in that whole region.

If a soldier ever stepped on a child like that the child would not have her eyes closed but would be in full mouth scream. And where is the follow up photos of this pfakery? One can also see numerous people's legs and feet in sandals in the background, but no other "IDF" soldiers nearby. Would an IDF soldier venture into a hostile crowd, and step on a child without there being sufficient backup? (He would never do that anyway, but just as a logical exercise the photo is pure hackery). And why would the soldier avoid stepping on the arabic sign on the girl's abdomen? Because it would obscure the message?