The narrative already was being set, the Palinization of Michele Bachmann, but now that Fox News has joined in, it’s all but over as to the Michele Bachmann narrative if she makes it to a general election (including as to V.P.).

It’s a question to which there is no good answer because even having to respond to such a question, asked by someone of Chris Wallace’s stature, is damaging.  “I am not a flake” will be hung around Bachmann’s neck.

As reported by HuffPo, and as will be repeated endlessly in the left-blogosphere, print and broadcast media: 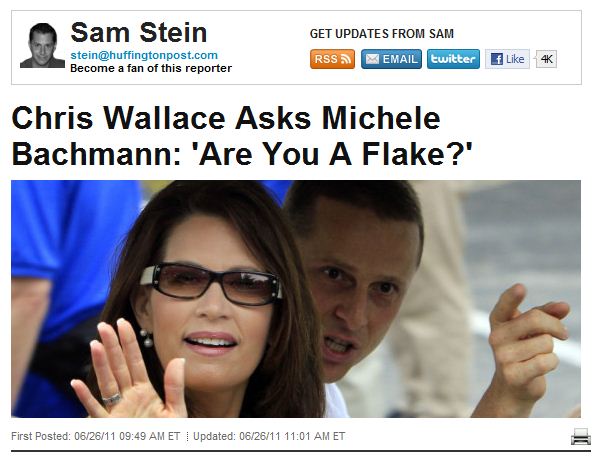 If any of you thought that Fox News was a sufficient counterweight to the liberal mainstream media, think again.

Update: Wallace has issued a video statement acknowledging that it was a mistake to have used the term “a flake” since such language in the question interfered with the real story, which was Bachmann’s response. Wallace is a class act, and I’m sure he didn’t mean to demean Bachmann by the use of the term, but it just goes to show how deep the narrative of Bachmann, Palin, and just about any other non-establishment Republican being “non-serious” or “a flake” goes.

[…] question which has no good answer. Yes? No. I am not? Coming from Fox News of all places, this will hang with Bachmann, at least until we move on to more serious business. Or the next Anthony Weiner. Share this: This […]

Huh? Since when does Chris “tingle” Wallace have stature?

Indeed I did get the wrong Chris. Still, since when does this Chris have any stature either?

Passing a bar exam is a meaningful credential which Bachmann should publicize if she has it. Does she? For that matter, does Obama?

Bachmann certainly passed the bar — she worked for the IRS for five years as a tax lawyer. And I’m pretty sure 0bama passed the bar too, though I think he only practised for a few months.

Any question starting with a preamble of “…some people say…” should incur the following response up front. Who are these some people…? This silly dodge is just a form of injecting the questioner’s opinion as a legitimate question to be answered.
Bob Schiefer did the same thing to Bachman with the good old…”some people say you lied…”.
Cadidates cannot allow this form of smear to continue and must demand up front to have the questioner quote the some people cannard. It is not used on Democrat party candidates and has been used for so long on conservatives and republican candidates that we no longer identify the smear for what it is.