A reader forwarded me this e-mail received from Obama’s fundraising operation, titled “They’re Wrong,” which suggests that Obama is anticipating weak fundraising numbers.  The full e-mail is in the image below (click to enlarge), but here is the key portion (emphasis mine):

We’re closing the books on the first fundraising quarter of the 2012 race at midnight tomorrow.

A lot of folks will be interpreting our numbers as a measure of this campaign’s support.

They’re not wrong, but they are wrong about why.

We measure our success not in dollars but in people — in the number of everyday Americans who’ve chosen to give whatever they can afford because they know we’ve got more work to do.

I’m asking you to be one of them. Please donate $5 or more before midnight tonight…

There’s certainly no guarantee that this is a bad omen, it may just be a way to get people to donate by creating a fear that the results will be bad and used against Obama.

But it does seem desperate, bring as many people in for $5 then spin the results even if the dollars are below expectations.   An alternative theory being advanced is that Obama has done so well with big donors, the campaign is afraid of the image.

While Obama is pushing big donors to max out now as part of a billion dollar fundraising goal, the message will be how many small donations he received. The same charade that took place in 2008. 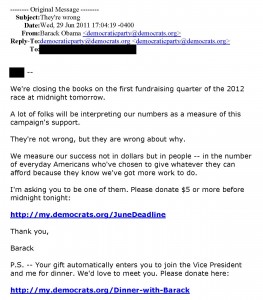 BO might flee the primary rat race if he gets ticked off enough by the in-house betrayals.

Or if they turn the Chicago tables on him and give him an either/or. This is entirely possible (and increasingly likely).

Fuzzy, I only hope you’re right. What makes me a little skeptical is that they would end up losing the black vote.

[…] Legal Insurrection – – – – As mentioned yesterday, Obama not only is running a cheesy $5 raffle fundraising stunt, he also is pushing donors hard to […]

Here’s what strikes me as desperate: the number of rightwing blogs all over the web chortling and rubbing their hands together at the thought of an anemic quarter of fundraising by Obama. Wow!

And get real, people: Obama is not going to be primaried. Focus on finding a Republican candidate who can actually compete.