Anti-Palinites Go All In On Epistemic Closure

Anti-Palinites Go All In On Epistemic Closure 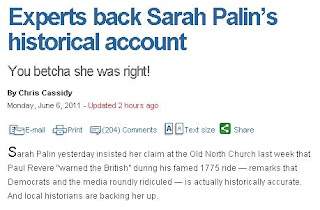 This weekend, lacking any new Weiner revelations (but see today), the left-blogosphere (but not exclusively the left) was preoccupied with proving that Sarah Palin was wrong when she said that Paul Revere had warned the British that the colonial militias were massing.

The basic premise of Longfellow’s poem is historically accurate, but Paul Revere’s role is exaggerated. The most glaring inconsistencies between the poem and the historical record are that Revere was not the only rider that night, nor did he make it all the way to Concord, but was captured and then let go (without his horse) in Lexington, where he had stopped to warn Samuel Adams and John Hancock of the impending attack.

Longfellow’s intention was not to write a history; it was to create a national hero and he was successful at doing so.

When I pointed out a fact, that Revere himself wrote that he had warned the British that the colonial militias were waiting, the anti-Palinites went into full attack mode, calling me a “deranged propagandist,” of making Palin “an object of idolatry,” and of validating “the vagina vote.”

Charles Johnson purported to uncover a conspiracy by one person to update the Wikipedia entry on Revere, although Charles did not point out what would have been inaccurate about the updates.

The debate also shifted, from she was wrong as to the fact of the warning to she was wrong as to Revere’s intent.  The goal posts constantly were moved.  All in all, there was an intellectual shut down by those on the left and right who don’t like Palin, an unwillingness to consider facts which contradicted their narrative.

The Boston Herald quotes two local historians who back up the fact that Palin may have been right:

Boston University history professor Brendan McConville said, “Basically when Paul Revere was stopped by the British, he did say to them, ‘Look, there is a mobilization going on that you’ll be confronting,’ and the British are aware as they’re marching down the countryside, they hear church bells ringing — she was right about that — and warning shots being fired. That’s accurate.”

Patrick Leehey of the Paul Revere House said Revere was probably bluffing his British captors, but reluctantly conceded that it could be construed as Revere warning the British.

“I suppose you could say that,” Leehey said. “But I don’t know if that’s really what Mrs. Palin was referring to.”

McConville said he also is not convinced that Palin’s remarks reflect scholarship.

“I would call her lucky in her comments,” McConville said.

Fine, call her lucky.  But don’t shut your mind to the possibility that she was right factually, and don’t accuse those who pointed out facts of being idol worshippers or worse.

The shutting of the collective anti-Palin mind is what we witnessed this weekend.

If all people know of Revere is Longfellow’s poem, which is what the reaction to Palin’s remarks seem to show, then they know far less than they think.

I wouldn't call Palin "lucky". She had just toured the North Church so she was repeating back what she had just learned. So it was much more accurate than anyone would be if they relied on, say, the Longfellow poem, as most seem to have done.

My quibble though is that while generally accurate, she did kind of garble the facts together. George Bush also tended to do the same thing. I never thought he was stupid. I always attributed it to a) nerves being put on the spot and b) past experience being raked over the coals for every misspeak.

What a person may know and what might come out of their mouths in an off the cuff moment are not necessarily related. I should know. I am one of those people whose mouth regularly betrays me in spite of my best intentions.

Is this a good trait in a politician? It makes me wonder how they get into the line of work in the first place and how they succeed from there. But one doesn't need to be able to talk eloquently in order to govern well, do they?