Why are the pre-1967 borders of Israel, which amount to the 1949 armistice lines, so sacrosanct?

Once you buy into the narrative of exclusive Palestinian victimization, once you take the Helen Thomas view which is widely accepted in many circles that Israel is an alien European implant, once you view the desire to placate the Arab world as the fundamental U.S. interest… 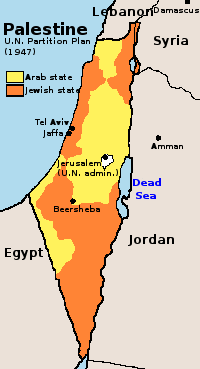 If Obama had proposed the original 1947 U.N. partition plan and 1948 borders as the starting point, plus land swaps, would it be disrespectful to “my President” for Bejamin Netanyahu to explain why that could not and would not happen?

Would the domestic U.S. opposition merely be another occasion for Glenn Greenwald to denounce the Israel Lobby and the Israel-firsters?  Would Andrew Sullivan, while reiterating his Zionist credentials, blame Israel for whipping up the domestic opposition?

Really, if you are going to buy into the Israel Apartheid narrative of law professor George Bisharat, the descendant of settlers in Jerusalem, why not have the intellectual honesty to admit that there is no line in the sand, there is no Israeli right to exist as a Jewish state, there is no reason to do anything other than placate the Arab street?

Senior Hamas leader Mahmoud Zahar said Monday that it was clear that US President Barack Obama’s platform was not so different from the one adopted by former US president George W. Bush. According to Zahar, the 1967 borders, while “sacred,” were not the final borders on which the Palestinians should settle.

Speaking to Al-Emirate Al-Youm, Zahar asked “Why won’t we talk about the 1948 borders? Why won’t we discuss the partition plan which was internationally recognized?”

If you didn’t know that the quote was from a Senior Hamas leader, would you be surprised to hear it from the chorus of domestic Israel critics?

I expect Jimmy Carter to chime in at any time.

If they intended to act peacefully (stop laughing!) its baby steps. Ask for more than you want, take what you can get, then come back and ask for more.

But why ask for the moon when all you really want is to get enough land to render Israel indefensible? Negotiate for the highground, getting as much of it as you can, along with all the buffer it provides and natural chokepoints. Its not about land for settlements and homes, its about being able to put tanks and forces across the river without them having to fight their way uphill out of the Jordan Valley. Its about talking your opponent into putting his neck in the noose.

Professor, don't let the Greenwald/Sullivan "Israel Lobby!!!" crowd make you feel like you need to play defense. Stay on offense and call them out for what they are– a "disloyalty smear lobby."

Like my Jewish friend I mentioned in another post (whose grandfather corresponded with Einstein, for crying out loud … the family has a letter written to their grandfather from Einstein), a number of Jews in the media seem to feel embarrassed/ashamed of the Jews' fantastic and disproportioate success in America and, at the top of their own personal Maslow's Pyramid is the final stage of self-satisfaction through a pseudo-noble form of self-criticism that is manifested by throwing Israel under the bus.

I look at my Jewish friend and the saying, "the Jews are like everybody else … only more so" comes to mind. He's taken the admirable quality of self-criticism and turned it into a fanatical obssession in search of equality … all because of his embarrassment at the Jews' glaring success.

When I was a teenager and the only things on my mind were girls, football, and rock music … he was a political junkie. Besides referring to the Israelis as "Nazis," he gave me an anti-Israel book about the oppressed Palestinians.

At the risk of sounding like a doctor, I have to make a diagnosis and say this is some sort of perverse psychological condition.

It was so refreshing to see Bibi standing up for his people.

My solution: The Israelis say to the "international community,"

The Muslims and their apologists seem to forget their founder was late to the game… only beating out Joseph Smith and L. Ron Hubbard by a few centuries…