Spiking The Football Is Addictive

Spiking The Football Is Addictive

Someone should start keeping count, and see which rises faster, the national debt or Obama’s use of the bin Laden killing: 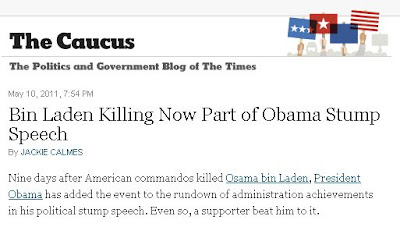 Charles Hurt at the Washington Times (formerly of the NY Post) has a pretty good take on actions of the narcis-spiker in chief actually calling those of us who want to celebrate the takedown "ugly Americans" while he revels in spiking the ball at every stop!

"Of course, no lecture from Professor Obama would be complete without a fat stripe of hypocrisy running right through the middle of it.

And so after telling all of us ugly Americans not to "spike the ball," he promptly embarked on a week-long dance in the endzone featuring enough ball spikings to have him benched for the rest of the season.

There he was spiking the ball at ground zero and then he was in Kentucky, grinning from ear to ear and spiking the ball. Then he met behind closed doors with the Navy SEALs who actually carried out the operation for a little private ball spiking.

The guy was suddenly so enthused about the whole war on terror one might forget his administration's efforts to ban the phrase "war on terror," close Gitmo and generally apologize to the Muslim world for all these ugly Americans."
. . . .

As Tec, the gang leader, says in the 2003 movie “Malibu’s Most Wanted” …
Tec: [high-pitched scream] STOP IT! You say one more line and I’mma have to smoke myself!
Obama has made himself into a “one trick pony” that has run it’s course.