I previously reported on the Recall Wirch efforts in Wisconsin, directed against Democratic State Senator Robert Wirch.  Among other things, the Wirch campaign hired telemarketers who made misleading “push calls” to people who signed the recall petitions, and also engaged in a smear campaign trying to throw out even legitimate signatures based on vague claims of widespread fraud.

The Wisconsin Government Accountability Board has rejected these attacks on the petitions, and has certified 17,544 signatures (only 13,537 were needed). 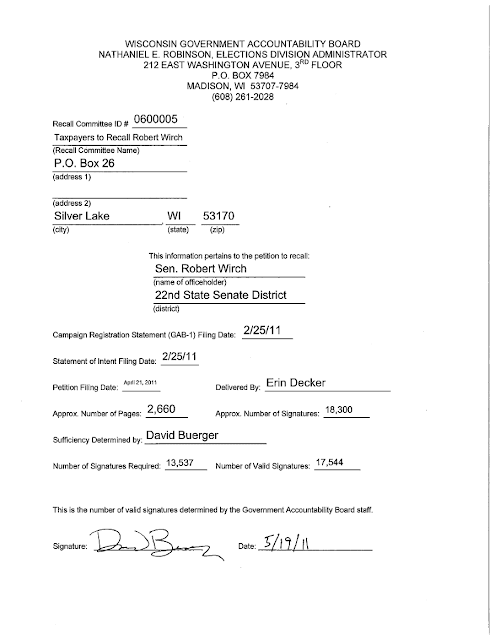 Do not  be surprised if this ends up in court, although the weakness of the challenges should not result in a reversal.  As I pointed out before, the Wirch campaign could not mount specific challenges to enough signatures to avoid the recall, and was left to the argument that even legitimate signatures should be thrown out if gathered by someone who was paid to circulate petitions, even though such payments are lawful.

In a rational world, such a challenge would have no chance of success.

But then again, in a rational world a state court judge would not have prevented the legislature from making law, and would have awaited a law coming into effect before ruling on the validity of the law.  And in a rational world, an appeals court would have promptly vacated such a trial court ruling.

Instead, we are where we are.

Update/Clarification:  It appears that this is a certification of the validity of the signatures, not a ruling on any legal objections raised by the Wirch campaign as to why valid signatures should be thrown out.

Can anyone tell me the status of the recall petition for Dave Hansen? The petitions were stolen a month ago. Is that dead in the water now?

@Van Halen – doesn't look like ruling from GAB yet. Info on all recalls is here, http://gab.wi.gov/elections-voting/recall

I've been watching and studying the GAB postings on the recalls. The Hansen recall legal battle and Darling recall one are the most interesting.

The Darling recall proceeding appears to hinge on enforcement of the 9.10(2)(d) statute. http://gab.wi.gov/node/1655

Which raises an interesting question in my mind. Does the statute(s) require the local individual to register the petition and file the registration statement or not? Are we going to allow outside groups to influence each District politics and just have a local surrogate file and pass control out of the District? That is a major violation to the constituents of each District, R or D as far as I can tell.

Please correct me if I am interpreting this incorrectly.