The demand for a recount, at taxpayer expense, by JoAnne Kloppenburg has produced almost no change in the vote count after six days of counting, but has cost taxpayers several hundred thousand dollars already.

The Prosser Recount committee has a handy way of keeping track of the tally and the cost, what it calls the Kloppenburg-O-Meter, which as of April 28, with 31.75% of all wards recounted,  showed that Kloppenburg picked up 111 votes at a cost of $462,000. 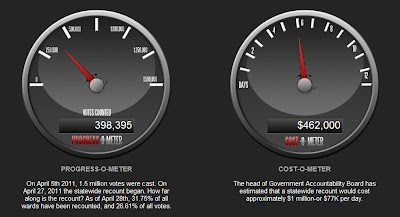 As of today, with over half the wards and votes recounted, the count has not changed much, with Kloppenburg picking up a whopping 148 votes.

Considering that the vote margin after the full canvass was 7316, and no recount in Wisconsin ever has resulted in a change of more than a few hundred votes, this is shaping up as a paradigm of how easy it is for Democrats to spend other people’s money.

@Tialoc – no votes were "found." They were reported by the local precincts and noted in the local press, election night. The only issue was what the county reported to AP that night, but reporting to AP is not official. The official result was the canvass, which the WI GAB found was proper in Waukesha.

The votes were put on a personal computer and not reported via the normal means. I'm not sure how much more "found" they could be. The SoS website didn't include them so it was not just the AP that didn't get them.