Gallup is out with a poll taken yesterday on the issue of who deserves credit for finding and killing Osama bin Laden.

The results are very telling.  Understandably, the U.S. military gets the most credit (89% Great Deal, 9% Moderate Amount), followed by the CIA (62/26).

Obama has been criticized for his egocentric speech Sunday night, but if that’s the case it didn’t work, as Obama’s numbers were only 35% Great Deal, 36% Moderate Amount.

And although Obama had nary a kind word to say about the Bush administration’s fight against bin Laden, the public still credits Bush 22% Great Deal, 30% Moderate Amount.  That’ not just Republicans, as 48% of Independents and even 40% of Democrats give Bush a combined Great Deal/Moderate Amount rating.
Bush’s numbers are pretty good considering that Bush has been out of office for over two years, and the mainstream media and Democrats relentlessly have pushed the false narrative that Bush was not trying to find bin Laden.

Imagine what the numbers would look like if they said something nice about Bush. 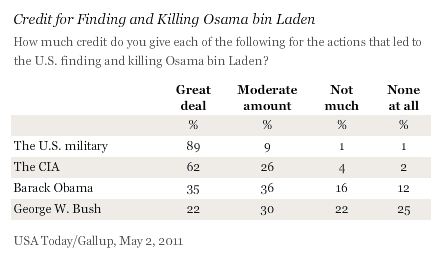 @William: Yup. Absolutely right. That's why he shut down the CIA's bin Laden unit in 2005 – of course, that may just have been because he was cranky about having blown his chance to get bin Laden at Tora Bora.

Fewer than 100 American commandos were on the scene with their Afghan allies and calls for reinforcements to launch an assault were rejected. Requests were also turned down for U.S. troops to block the mountain paths leading to sanctuary a few miles away in Pakistan. The vast array of American military power, from sniper teams to the most mobile divisions of the Marine Corps and the Army, was kept on the sidelines. Instead, the U.S. command chose to rely on airstrikes and untrained Afghan militias…

Even when his own commanders and senior intelligence officials in Afghanistan and Washington argued for dispatching more U.S. troops, (Commanding Gen. Tommy) Franks refused to deviate from the plan. (2009 Senate Foreign Relations Committee report)

The report "removes any lingering doubts and makes it clear that Osama bin Laden was within our grasp at Tora Bora," and that decisions made by Donald Rumsfeld, his deputies, and other top administration officials allowed Bin Laden to escape.

As LtCol Reid Sawyer, the director of the Combating Terrorism Center at West Point, told NPR earlier this week, "if bin Laden had been killed in Afghanistan eight years ago in the caves of Tora Bora, al-Qaida might well have died with him. Now the organization is diversified enough it could weather bin Laden’s death — and hardly miss a beat."

There. Was that better?

@Nameless Cynic – no it's not, it's 20/20 hindsight. If we dropped 800 Army rangers into Tora Bora, as some now say we should have, we would have had no assurance of capturing him (if he was there), and we would have had stranded hundreds in an area where we had no logistical support (at that time). As to disbanding the bin Laden unit, that does not mean that we stopped looking for him. As we now know, that search never stopped. If you can show me that we had the same intel in 2005 or 2006 as to bin Laden's location that we did a month ago, then I'll agree. But we didn't.