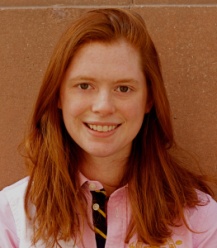 Congratulations to our very own Kathleen McCaffrey, who has been named one of only five Bartley Fellows by the Wall Street Journal.

A copy of the announcement by Paul Gigot is here:

Kathleen McCaffrey, from Fair Lawn, New Jersey, is a rising senior at Cornell University with a major in philosophy and history.  She is a staff writer and campus editor of The Cornell Review and is the editor and founder of www.ThePoliticizer.com, an online magazine of opinion articles from students across the country.  Last summer she interned at America’s Future Foundation through the Koch Summer Fellow program.   She will work in London this summer, reporting to Brian Carney, editorial page editor, WSJE.

The Bartley Fellowships are a big deal, and the application process is extraordinarily competitive.  Here is the description from the WSJ website:

Throughout his 30 years as The Wall Street Journal’s Editorial Page Editor, Bob Bartley inspired principled and original thinking that changed and shaped the society in which we all live. He also devoted attention to teaching and motivating talented young people, many of whom have gone on to careers in journalism at the Journal and elsewhere. The Bartley fellowships are consistent with that legacy.

Bob Bartley achieved many honors during his long tenure here including a Pulitzer Prize and, shortly before his death in December 2003, the Presidential Medal of Freedom. In awarding that medal, President Bush cited Bob as “one of the most influential journalists in American history.” The Robert L. Bartley fellowships will help to perpetuate not just Bob’s memory but above all the principles and priorities to which he devoted his distinguished career.

With Kathleen having Koch and Wall Street Journal (Murdoch) fellowships, Kathleen now has an impeccable pedigree.  It’s only a matter of time until the most expensive proofreader in America starts checking her work.

Let’s give Kathleen a big Hooah.

Bonus question.  After writing for the Wall Street Journal from the Capitals of Europe, what’s the chance Kathleen will return to this tiny little farm called Legal Insurrection?  (Poll closes Monday at 5 p.m.)

Thanks everyone! And, gs, you are entirely correct — Prof. Jacobson's recommendation was a huge boon :-).

Grats Kathleen. I just know that she'll remember her humble roots and will grace the pages of Le·gal In·sur·rec·tion for many years to come with her keen Objectivist insight and unique take on current events.

Fantastic news and a well-earned honor, Kathleen! Even with everything you've already done, you're just getting started, aren't you?
😉

The Journal's fine and all, but the Professor and you have a highly regarded and influential venue right here. You know, it's easy to do it all if you take a cocktail of vitamins and copious amounts of caffeine every morn.