Ken Layne, the owner and lead editor of Wonkette, is in damage control mode over the article by recent college grad Jack Stuef ripping into and mocking Trig Palin.

I have four kids myself and I wouldn’t want them mocked on the Internet by a bunch of cretins on the Internet. And that’s just one reason why I wouldn’t parade my children around in the media. What kind of mother does that?

In any case, Jack has been admonished and put on night probation until further notice. Anything involving Palin, I want to make it extra clear that *Palin* is the problem with America. Not her kids. Not her little kid, anyway. The older ones seem to be on their own path and you can’t really blame Sarah for it, although she certainly encourages the sleaziest possible behavior from her grown children, which is hardly a very “family values” thing to do. But as far as Jack’s future, a few months on the night shift cleaning up the furious, ALLCAPS unmoderated Wonkette comments, without pay, should teach him a thing or two about writing stuff that confuses the target. Trig is cool with us. Sarah Palin, on the other hand, is a grave danger to America.

First of all, Sarah Palin doesn’t “parade” her kids around any more than any other politician.  Hey Ken, have you seen all those photos of the Obama kids with their parents on vacation and elsewhere?  I’ve addressed this phony “prop” charge before.

But more important, Layne has a very convenient memory.  In 2009, as I documented in my post Wonkette Goes After Trig Palin Again, Layne mocked Trig, including running this photoshop which he took from a posting board: 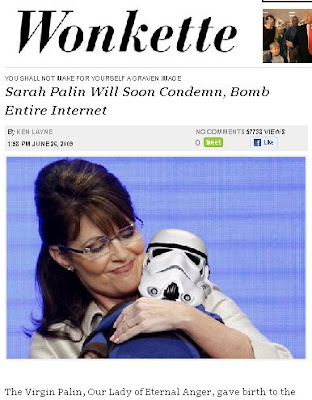 In 2008, Wonkette ran a post by Jim Newell, who now works for Gawker, mocking Trig and joking:

“Little baby Trig must be so glad he wasn’t aborted for this, his first Halloween, because his parents dressed him up like a political party symbol to be carried around at snarling political events. Aww. Isn’t life just grand?” 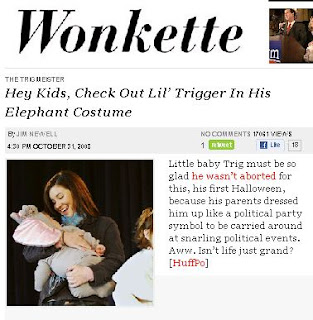 “Now Sarah Palin is even more of a hero for not aborting Trig: All those retard genes came from Kenya illegally.”

And I could go on and on.  Just do a search of the Wonkette website and you will find dozens of posts in which Trig either is the main focus of mockery or is the recipient of parting shots from Wonkette writer.

Why would Stuef think that making fun of Trig was off limits given the history of Wonkette under Layne?

Layne has thrown Stuef under the bus, but it should have been the other way around.

Update: Trig Is A “Prop” To Them Only Because They Don’t Like Seeing A Child With Down Syndrome

Really? More than likely, the Wonks don't know a Sin from sin cos they get lost in nasty tangents with no foci other than emotive.

The Key fact stated is that the writer is a "recent college grad". He thinks he knows all. One day, God willing, he will get to to hold his newborn baby with his wife in the delivery room. Only then will the hole in his heart be filled.

Came to this site a little late, but not too late to express my real disgust with the murderous baby-killing monsters at Gawker and Wonkette who delight at ridiculing toddlers—do these monsters actually think they're cool? Both male and female libtard abortion-loving murderers are no better than Hitler's SS & concentration camp guards.

I would love to see half-Inuit Todd or his son Track come face to face with these girly-men. I'd pay to see what happens……..

Rightklik, are those tweats genuine?

If so, OMG, words fails me.