Spotted by a reader in Roslyn (Long Island), NY:

“Spread my work ethic, not my wealth!” 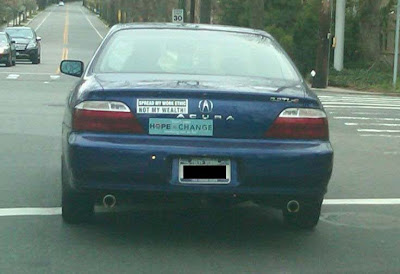 Thanks for these more Conservative images – I am encouraged!! If such bumper stickers are appearing in New York and other bluer-than-blue states, it bodes well for Conservatives.

Some stickers I've seen in the sovereign state of TX:

No Kinetic Action for Oil

That's perfect! The have-nots want the goodies, but they have no interest in going through the process everyone else has to go through in order to get them.

They have no idea that when they get free money, it actually comes from people who embraced education, practiced discipline, applied themselves, worked hard, and paid their dues in the free market system.

Through class warfare, Obama panders to the have-nots, to the detriment of the achievers. Following such a path will eventually end up being to their own (and our) detriment. They seem unable to comprehend that through such reckless spending, they are ultimately going to have less with which they can bribe the have-nots for their votes. That's why they are going to resist cutting back spending and instead make every attempt to paint fiscally responsible Republicans as demons.

The reckless spending (redistribution) has been the life blood of their constituency. It will be interesting to see how loyal the have-nots will be after the Democratic socialists have over fished the benefits pond and their goodies start to dry up. They are all coming unglued now because its inevitable, and having no concept about cause and effect, they are simply left with the continued practice of absurdity.