Saturday Night Card Game (“Your race card narrative does not fit, so you must acquit”)

Saturday Night Card Game (“Your race card narrative does not fit, so you must acquit”)

Donald Trump has pushed the issue of Barack Obama’s birthplace and citizenship back onto the front pages.

I’m not going to revisit the merits of the issue, but I will note the continuing tendency to treat any questions as to the issue of Obama’s eligibility as inherently a reflection of racism.

This time from Leonard Pitts, Jr., writing in the Detroit Free Press (emphasis mine):

“So it is time to call this birther nonsense what it is — not just claptrap, but profoundly racist claptrap….

It is telling that the white candidate who was, in fact, not born in the U.S.A. (Sen. John McCain was born in the Panama Canal Zone) did not face these questions, while the black one who was born in Hawaii has been unable to escape them….

Frankly, I wish Trump and his fellow birthers would just go ahead and call Obama an N-word. Yes, it would be reprehensible and offensive.

But it would be a damn sight more honest, too.”

Actually, John McCain was challenged on the issue of whether he was a natural born citizen.  It’s even on the internet, so it should not have been very difficult for Mr. Pitts to find.

And such questions didn’t start in 2008, McCain was challenged on the issue in the run-up to the 2000 primaries, as reported in the early days of the internet by a columinst for The Washington Post:

John McCain has more pressing worries than eligibility on the road to the Republican presidential nomination in 2000. After his lead role in pushing campaign-finance and tobacco legislation, both anathema to the Senate GOP leadership, the Arizona senator may have to spend a lot of time trying to prove his party credentials before he ever gets to Iowa or New Hampshire.

But is he constitutionally qualified to become president?

And the issue came up again in 2008, as reported at MSNBC.com:

Sen. John McCain, R-Ariz., and his advisers are doing their best to brush aside questions — raised in the liberal blogosphere — about whether he is qualified under the Constitution to be president. But many legal scholars and government lawyers say it’s a serious question with no clear answer….

And at The NY Times.com:

The question has nagged at the parents of Americans born outside the continental United States for generations: Dare their children aspire to grow up and become president? In the case of Senator John McCain of Arizona, the issue is becoming more than a matter of parental daydreaming….

Mr. McCain is not the first person to find himself in these circumstances. The last Arizona Republican to be a presidential nominee, Barry Goldwater, faced the issue. He was born in the Arizona territory in 1909, three years before it became a state. But Goldwater did not win, and the view at the time was that since he was born in a continental territory that later became a state, he probably met the standard.

It also surfaced in the 1968 candidacy of George Romney, who was born in Mexico, but again was not tested. The former Connecticut politician Lowell P. Weicker Jr., born in Paris, sought a legal analysis when considering the presidency, an aide said, and was assured he was eligible. Franklin D. Roosevelt Jr. was once viewed as a potential successor to his father, but was seen by some as ineligible since he had been born on Campobello Island in Canada. The 21st president, Chester A. Arthur, whose birthplace is Vermont, was rumored to have actually been born in Canada, prompting some to question his eligibility.

There also this thing called the United States Senate.  And it has a website too.  And if Mr. Pitts had searched really hard, Mr. Pitts could have found a document.  And that document was a Resolution.  And the Resolution, co-sponsored by Barack Obama, declared that John McCain was a natural born citizen.  You see, questions about whether John McCain was eligible to serve as President were so prominent that the United States Senate took up the issue (although I’m not sure it’s determination is binding). 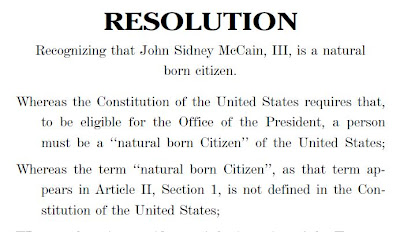 Wait a second.  This does not fit the narrative.  All these white people had their eligibility challenged or at least questioned based on birthplace or speculation as to birthplace.  And it’s even on the internet.

But didn’t Mr. Pitts just tell us that this only is happening to Barack Obama because Obama is not-white?  Is it even remotely possible, in Mr. Pitt’s wildest imagination, that some people actually take constitutional eligibility requirements seriously?

And while we’re on it, who exactly would play politics with such things?  Only conservative racists?

Note that the MSNBC article quoted above pointed out that questions about John McCain’s eligibility were being raised in the liberal blogosphere.  Like at Crooks and Liars, which posted a clip from CNN on the issue, and then wondered: “It’s a question for legal minds now, but how funny would it be if after all this, John McCain would be forced to bow out of the race on grounds of ineligibility?”

Your race card narrative does not fit, Mr. Pitts, so you must acquit those you have charged with racism.

The reason I said GTFO is because by your own admission you have no idea what our constitution defines as a "natural born citizen". If you can't come to a debate or discussion with the most basic set of facts, you need to leave.