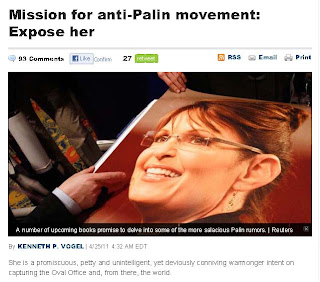 As you know, I’m not a fan of Politico’s news operation.  Today’s feature article, Mission for anti-Palin movement: Expose her, is a prime example of how the MSM will go after Republican candidates or potential candidates.

Under the guise of reporting on the anti-Palin movement, Politico manages to dredge up almost every crank accusation against Palin.  The fourth word in the first sentence of the article just happens to be “promiscuous.”  How nice.

In the course of the article, Politico manages to compare Palin to Charlie Sheen, Lindsay Lohan, Hitler, and Father Coughlin, but only because such people were controversial and celebrities, of course.  And Politico did not make the connection itself, it merely quoted someone making the connection, that’s how real reporters do it, right?

Politico even refers to Rebecca Mansour, an aide to Palin who helps with SarahPAC, as an “attack dog,” with an embeded link in Mansour’s name in the Politico article to the viciously anti-Palin Palingates website.  This is beyond contemptible even for Politico.

And no article about Palin and Trig-trutherism would be complete without noting that prying into the minutiae of Palin’s personal life is just as ridiculous as prying into the constitutional qualification of the President of the United States.

We have our work cut out for us in 2012, folks, regardless of whether Palin is the nominee or even runs.

Update:  Perhaps I have been too harsh on Politico, after all, at least they did not quote Wonkette.

For the folks who are concerned about Gov Palin calling out the LSM – they are part of the Domestic Enemy Apparatus, or at least their enablers – if The Republic is to survive the Press must return to their true watchdog status …..

Did not John McCain buddy up with the MSM? Did they give him fair treatment once he was challenging Their One?

The LSM must be defeated along with The Left like Breitbart has said – and this is possible for the first time because of technology. But it will require at least 30% of the citizenry to be committed and engaged. (I chose 30% due to it being a historical precedent – I read that only about 30% of the public fought the British during the First American Revolut!on, the rest were either passive or against The Patriots)

wow awesome read! Nice comments too! That's twice today! I should faint I guess but I'm too much in shock!

"I've seen members of the MSM grumble that since Obama's election she has refused invitations to be interviewed by anybody except Fox News and "conservative media". "

That's what they say, but like so many things that "they" say, it's not true. I've seen her on many stations besides Fox. True, not as much, but Fox pays her for commentary and she's not avoiding the others completely either. The whole "only gives interviews on Fox" meme is yet another lie put forth by those seeking to discredit Palin.

I stopped commenting on Ben Smith's agitprop gibberish long ago after I found that any critical remarks were simply not recorded and my posts disappeared in the memory hole.

Their agenda is completely apparent and their writing skills are barely equal to the average high school newspaper. As for analysis, it is absent unless contrived to make the Won look good or the GOP look bad. A poor idea badly executed, Politico isn't even as good as HuffPo, where Sam Stein actually commits journalism from time to time.

CONSERVATIVES=> No retreat, No Surrender.